Book Review: The Fool and the Sparrow 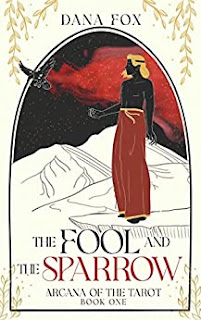 As the top operative for a global shadow government known as the Order, Thea has served and protected the elite 1%. Her life changes suddenly when she escapes the Order with damning evidence of the group’s existence. Now she is on the run for her life, looking for a way to expose what she’s stolen. Fate intervenes when a fortuitous encounter with a tarot card reader leads her directly into the path of a divine being from another realm.

Kit the Fool leaves the Arcana realm for Earth, following visions sent to him from his sisters, Fiona the Moon and Kathryn the High Priestess. As he accompanies Thea on her quest to expose the Order, he is thrust into a cat-and-mouse adventure that captivates his curious and impulsive nature. As does the Sparrow at his side. The stakes are raised even higher when he uncovers a threatening connection to his own people.

Together, Thea and Kit set off to expose the nefarious Order, but along the way, the two find themselves tumbling headfirst into an attraction that defies cosmic logic. How will these two souls from very different worlds defeat the odds stacked against them?

The Fool and the Sparrow is the first book in the Arcana of the Tarot series. It is a fantasy romance packed with political intrigue and high heat, featuring a mythical being let loose in the mortal world and a weary heroine on a life-or-death mission.

I really found the synopsis of this book to be very intriguing and thus the reason I wanted to read it. So glad that I took a chance on this book. It was a sweet surprise in a very good way. The blend of mythically with present day was lovely. The dynamics between Thea and Kit worked really well together. Kit was my favorite. He had a witty side to him, which I guess you could say comes from the fact that he is the "fool". Also, Kit interacting with the real world and discovering new things was entertaining.

I don't know much about tarot cards but after reading this book, I am curious to learn more about tarot cards. As you can expect that this book being a fantasy romance that Thea and Kit do start a romantic relationship. Yet, it did not happen until much later into the story. I appreciated this as it made it more believable and real this way. Wow, though as the steamy level is spicy.

This was a fast read for me. I look forward to reading book two in this series. Don't let the word "fool" trick you in the title of this book as author, Dana Fox weaves a lovely story with witty, engaging characters with The Fool and the Sparrow!

The Fool was her future.

And this Sparrow was free.

Thank you KatieandbreyPA for the book to read. 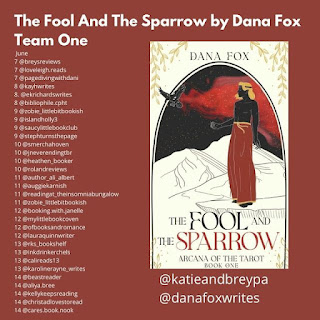