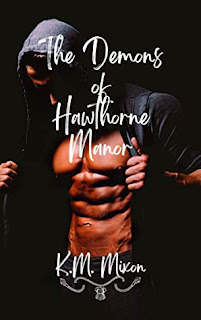 Seraphine Thomas is already haunted inside of her mind. She has left behind the life she knew for a better chance at solace. Banemoure promises to be all that and more. New job, new weather, new start. Her new job at Hawthorne Inc. seems too good to be true. They want her, and they want her now.It’s always good to be wanted right?

Bram Hawthorne hired Seraphine for the front desk, but now reclusive his brother has started to slip in his duties to the company. As the new girl, Seraphine will be the one who draws the short straw. He will send her to clean up Eldric’s messes and keep him in line. She will never have to even be in contact with him, or so he thinks. But the ghostly man that stalks the halls of Hawthorne manor feels a pull toward the bedeviled Seraphine.

An unexpected twist of fate will leave two brothers enchanted by the same girl. Neither could have ever dreamt of what Seraphine would become to them.

Will working with the Demons of Hawthorne manor be the best opportunity Seraphine has ever gotten? Or will it be the very thing that leads her to her end? She will face off with the beasts that call Hawthorne Manor home, and they will all demand a piece of her.

This is the first book I have read by author, K. M. Mixon. I can guarantee you that it will not be my last book. In fact, this book needs to come with a warning..." Once you start reading you will not be able to stop until the last word has been read!" Also, be prepared to have your heart ripped apart. I was so invested in this book and everyone that after reading I had to take some time to recover, which to be honest I don't think I will fully be 100% recovered! I can't wait to read K.M Mixon's next offering.

The men Bram, Eldric, and Elias are all so hot. Each one is different in their own ways and have their own demons and scars to fight. Yet, they all share one thing in common and that is their love for Seraphine. Seraphine is one very lucky woman to have these men in her life. If you asked me which of the three guys is my favorite, I would honestly have to tell you all of them.