Not Quite Over You 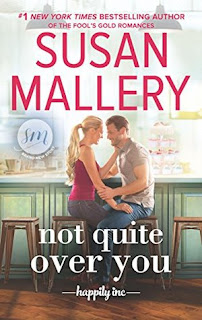 Silver Tesdal has a head for business and a mouth made for kissing, and banker Drew Lovato has his eye on both. But ever since he was dumb enough to let her go, she’s kept him at a distance. When the bank turns her down for a loan, Drew sees a double opportunity—he can finance her brilliant, unique idea to rock Happily Inc’s wedding industry and win back her trust.

Despite her reputation, Silver’s not as tough as she seems. Losing Drew nearly destroyed her. Still, his kisses are as tempting as his offer to invest in her business. If she can’t quite get over him, maybe she should get under him and knock him out of her system once and for all.

But her best laid plans begin to unravel as Silver finds herself falling even harder than when they were high school sweethearts. Which means that she’ll have to come clean about the secret she’s been hiding from him for years—and risk losing him forever.


I have read every book in this series. I really like the people and the town of Happy. Everyone is so friendly and quick to help lend a helping hand. The last two books I really enjoyed. This time I am sad to report that this book felt like it took a tiny step backwards. While, the story was good as well as the characters; I felt like I struggled some to connect with the characters.

Silver and Drew were good. Yet, this is where some of the magic from the prior books seemed to be missing. Silver is a sweetheart but she didn't have as much spunk. Plus, it might have been because she was exhausted from trying with the bank to get a loan approved but she came off as defeated. On the other hand, Drew, was Silver's knight in shining armor. Together they made a good couple. Yet, the sparks for me were "mild". Although, I was not feeling this book as much as some of the prior novels, this was still a good read.
Susan Mallery