A Little Lost A Little Found 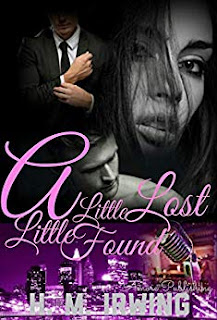 BOOK BLURB:
Lucy Little, born Luxy Ara Starr, grew up not having a clue she was the hybrid of two different worlds. Born to an American singer superstar for a father and an Australian mother, Lucy matured taunted by the missing limb that was her kidnapped-from-the-cradle twin brother, Blaze Starr.
Jace Neil is a Lucy’s childhood frenemy. Rich, fun-but-abrasive and a player, Jace is a little more than her provokingly mocking friend. Only she would never admit that attraction to his face. So, what happens when his usual provoking taunt turned flirtatious? Will Jace Neil be too hot to handle?

And how does Richard Reeves fit into all this? The self-made billionaire may not have come from old money like Jace, but he was fast friends with him regardless and it’s that friendship that brings him into Lucy Little’s already disruptive life. Is he for real? Did he really want Lucy? Or was he playing some kind of game of his own?

Love has a funny way of reaching out of the trenches and grabbing the unaware. But what if those trenches are bitterly entwined in a dark web of lies and deceit? Who will Lucy choose? Jace Neil or his friend Richard Reeves? Will she ever find her twin brother, Blaze? And how in the hell does she end up buried alive six-feet-under-in an unmarked grave on Valentine’s Eve?
Read this intriguing romance to find out.


My Review
The first several chapters flash, pretty, fast, jumping years at a time. Early on, Jace came to Lucy's rescue. He was and is her protector. Lucy and Jace had me all in. They took their relationship slowly, even though their was raw feelings involved. Every time that they didn't act on their impulses had me falling deeper and deeper for them.  Although, they were not the only characters in this story. There is Cat and Emily, Lucy's sisters and Richard and his daughter, Celine. I liked Lucy's sisters. They brought some light heartedness to the story.
If it was not for the last several pages of the book, I would have forgotten that this book was supposed to be about Lucy having a twin brother and meeting her biological father for the first time. There wasn't a lot of focus put on these factors. Yet, the story does end with a bit of a cliffhanger with reference to these points. Overall, I enjoyed reading this book. I plan to read the next book as I want to see what happens to Lucy and her family reunion.
H.M. Irwing