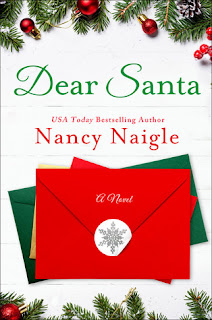 Angela Carson wants nothing more than to be the third-generation to run her family’s holiday store, Heart of Christmas, successfully. They’ve weathered over sixty tourist seasons, major hurricanes, and urban sprawl, in their old decommissioned lighthouse. But the national chain that set up shop in their small North Carolina town of Pleasant Sands may be more than Heart of Christmas can survive.

Encouraged by her niece to ask Santa for help, Angela gives in and lets the words fly in a way that, if Santa were real, would no doubt land her on the naughty list. What’s the harm when it’s just a computer-generated response?

Geoff Paisley has been at his mother’s side running the mega-chain Christmas Galore for the last ten years. When his mother falls ill, Geoff promises to answer the town’s Dear Santa letters in her stead. Soon he realizes the woman he’s been corresponding with on Dear Santa is Angela. How could the woman that grates his every last nerve in person have intrigued him so deeply through those letters?

When Geoff reveals that he’s her Dear Santa, will Angela be able to set aside their very public feud to embrace the magic of the holiday and possibly find true love?

I absolutely loved this book. It really touched my heart and got me in the Christmas spirit. This book is in the same line as a Debbie Macomber book. There was not a moment that I didn't love about this book; except, maybe the fact that I finished the book.

Angela had me cheering and fighting for her. The way she really was passionate about carrying on her grandmother's store and family tradition. I was so caught up in Angela's passion that I did see Geoff as the enemy in the beginning. Yeah, he may have been good looking but it was not until he started writing back to Angela as "Santa" that I did warm up to him.

Dear Santa is the perfect stocking stuffer. I can guarantee you that Santa would put Dear Santa on the "good" list.