October 20, 2009
I want to thank Anne with St. Martin's Press for sending me this book to review. 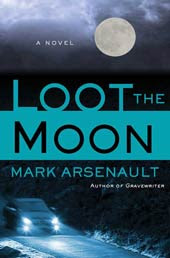 Attorney Martin Smothers requires Billy Povich’s assistance. Billy is a former journalist and gambler. Martin’s mentor, Superior Court Judge Gilbert Harmony was shot and killed. Judge Harmony’s death at first glance looks like a break in gone wrong. It seems though that Judge Harmony’s killer got it in the end. The killer died in a car crash.

Martin believes better that the killing was personal and someone paid to knock Judge Harmony off permanently. Billy starts doing some digging. He uncovers a whole slew of shady characters. Billy’s father is in the hospital, fighting for his life. Martin doesn’t want to let his former mentor down. With Billy’s hound dog attitude and Martin’s quick wit, these two won’t give up till justice is won.

Loot the Moon is the first book I have read by this author. I liked this book. Martin and Billy were engaging. I like that Martin did not come off as a sleazy lawyer. Though in my book, it was Billy who really stole the spotlight. He did most of the work…tracking down people, obtaining evidence and piecing it all together. There were a few times in the book, where I would start to lose interest but overall, I thought this was a good book. I would read another one by this author.
Mark Arsenault