Join Norm Spitzig, author of the humor/mystery/political satire novel, Soul on Nice, as he tours the blogosphere September 2 through November 29, 2013 on his first virtual book tour with Pump Up Your Book! 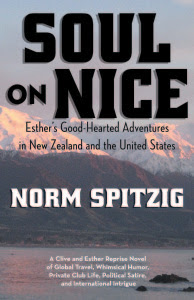 ABOUT SOUL ON NICE

Soul on Nice chronicles the latest and greatest adventures of the Old Bunbury Golf Links & Reading Club's waitress extraordinaire Esther, the highly eccentric but undeniably lovable protagonist of his previous epic works. This time Norm's scintillating tale is truly global in scope, with Esther opening the novel zooming her merry old way to beautiful New Zealand. This titanic clash between good and evil is part playful and evocative travelogue, part staunch conservative manifesto, part clever and poignant mystery, part whimsical exposé of the madcap world of private clubs, and all treasure trove of quirky good cheer. While anyone with a decent sense of humor will surely love Norm's latest story, readers who also understand and appreciate the fascinating world of private golf clubs will be doubly pleased.

Norm Spitzig is internationally recognized as a successful entrepreneur; a leading business consultant; an eloquent, visionary, humorous, and engaging speaker on a variety of important business and lifestyle topics; and an all-around good egg. His groundbreaking book Perspectives on Club Management—now more than thirty years old—continues to inspire and challenge private club owners, directors, managers, and students around the world. Norm, qua Clive Endive Ogive IV, is also the more recent author of three very funny and insightful books, Private Clubs in America and around the World and Murder and Mayhem at Old Bunbury, both of which are available at www.CliveEndiveOgiveIV.com, Amazon, many private club golf pro shops, and fine bookstores everywhere. The third, How Now, Norm's Tao, is Norm's autobiography, a book that has been recently hailed as a "powerful and poignant memoir by one of the most accomplished and unique writers to grace contemporary American literature." How Now, Norm's Tao, together with Soul on Nice, is available at www.NormSpitzig.com and from Amazon and assorted bookstores. Norm’s leadership and professional contributions to the worldwide private club industry have been varied and significant. Elected a national director of the Club Managers Association of America (CMAA) in 1989, he served as its national president in 1995—the same year he became one of the original six general managers to earn the prestigious lifetime Master Club Manager (MCM) designation. Norm currently serves as a principal & senior partner in Master Club Advisors (www.MasterClubAdvisors.com), publisher of the premier newsletter for leaders in the worldwide private club industry, Club Management Perspectives, and now regarded by more and more leaders in the global private club industry as the “general manager executive search firm of choice.” Norm’s Board of Directors’ leadership orientations, strategic planning sessions, and inspirational talks have been very well received at national, regional, and local meetings of many professional associations, company retreats, and great individual private clubs on six continents. He has the singular honor of having been twice named the club industry's educator of the year. Norm, who doggedly continues his improbable, and admittedly weird, pursuit of logging one hundred thousand running miles before he ascends to the great private club in the sky, resides in the historic town of Mount Dora, Florida, with his beautiful bride, Cody, and ball-obsessed chocolate Labrador, Lucy.

Tuesday, September 17 - Book featured at As the Pages Turn

Tuesday, September 24 - Book featured at Confessions of a Reader