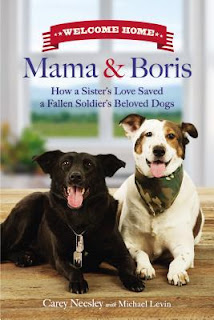 Carey and Peter grew up together. They are the best of friends. As they turned into adults, Peter decided that he was going into the military. While serving overseas, Peter formed a bond with a dog. The dog had four puppies. Peter built the dog who he named "Mama" a dog house to kept her and her puppies safe, after seeing one get killed by a car. Sadly only "Mama" and one puppy lived. Peter named the puppy "Boris". Peter talked about wanting to bring home Mama and Boris when he returns. A situation finds Peter dead. Now Carey must find a way to bring back the two dogs home and a piece of Peter within the dogs.


I am a sucker for a good animal story, especially a dog story. Thus when I see a book about a dog I have to read it. I knew this was going to be a good book to read but I did not know just how great it would turn out to be. The parts I found the most interesting was when Carey was organizing a way to get Mama and Boris back to the United States. I knew it would not be easy however I was not aware of the great people and companies that step up and help. Also the steps to get the dogs back. For example the dogs could not just fly back. They had to go be flown to several different places before they could come home. I feel like after reading this book that Mama and Boris are a small part of my family as well now.
Carey Neesley Michael Lewis