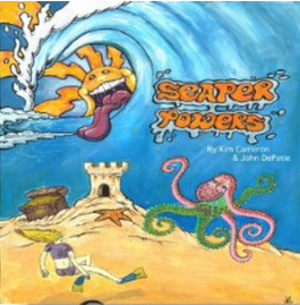 Emma's father comes home. He tells the family that they are going on a family vacation in St. Thomas. Emma hopes to see an octopus. She gets her wish when she meets Oliver the octopus. Emma and Oliver become fast friends.

Steve, a star fish has no friends. He wishes that he could find a true best friend. Steve also gets his wish and more when he meets Oliver and Emma. Now he has two friends. Emma, Oliver, and Steve go on a grand adventure to search for Bleu Jay's lost treasure of gold coins.
I listened to the audio book. Kim has a great voice for audio books. She is clear and animated. In fact all the readers involved in this book were great. They all helped to bring this story to life. I got nice mental images of Emma, Steve, Oliver, and the ocean they call home. I did not need the electronic version to see the pictures.

I had a fun time with Emma, Steve and Oliver. Each one showed that it does not matter who you are, you are special in your own way. I have to say however that my favorite was Steve. One I like his name and two he reminded me of the little train that could. This book is a book that the whole family will enjoy listening to. Seaper Powers: In Search of Bleu Jay's Treasure makes a splash in a good way!

Check out more about the book here

Kim Cameron began her career on KHAT TV as a small town reporter after DJ'ing on KRNU. With a journalism degree in hand, she moved to the Washington DC area writing for the Smithsonian Institute.  Her career took numerous twists and turns through corporate ladders and organizations, but telling stories was always a passion.  She is a proven lyricists with a song catalog of over 65, including a few children's songs.  She wrote her first musical in 2012 while writing for the National Examiner and providing the voice over character for an Asian animation movie.
Kim is a true believer in inspiring and nurturing kids.  She teaches vocal lessons to students at the School of Rock and volunteers at the Children's Hospital, singing at their bedsides.
While on tour in the Caribbean, she met a 12 year old who had a fascination with octopi.  This brief encounter inspired the creation of Mr. Octopus, a children's tune featuring a 7 year old that Kim recently signed to her record label. After completing the song, her co-writer and guitarist, John DePatie, encouraged her to take the song to next level by writing a children's book using the song as the impetus.
After the story was written, John and Kim thought it would be better told using a live narrator and the incorporation of the song.  After months of production, narration, editing, the creation of original musical score and sound effects, the audiobook was completed.
While Kim has had many accomplishments, she and John consider this their biggest feat.  Seaper Powers is the first of a series that Kim and John have committed to write and produce.