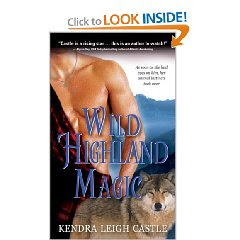 When Bastian an Morgaine was right years old, his father tells him that he is dying and that he is the last of the males in the line of Athins. A group of very powerful ice mages. He warns Bastian to never fall in love as it will only cause awful and painful heartache.

Catriona MacInnes and her family return from Americia after beging away for so long to rejoin the rest of the MacInnes pack in Scotland. The pack are wolf-shifters. Bastian has been living with the MacInnes pack. From the first moment Cat laid eyes on Bastian, they felt an instant connection with each other. Bastian and Cat try to deny what they feel for one another but the attraction is too strong and they finally given in to their feelings. But by doing so, Cat binds herself to Bastian and unleashes a horrific creature that wants to destroy both Bastian and Cat.

Cat and Bastian make a good match together. I liked the elements that Cat was the wolf and Bastian was the mage in this story. Usually you read whre the male is the wolf as a male dominated role but this time the character is a female. It showed that even females can be strong and sexy. Wild Highland Magic didn't just include shifters, mages, daemons but also dragons. One small problem I had was that there were so many characters that I had some trouble keeping everyone straight. This is the second book I have read by Kendra Leigh Castle and it won't be the last.
Kendra Leigh Castle

BurtonBookReview said…
Good review, mine is posting next week when she comes to visit my blog. I enjoyed it also, and I probably would have enjoyed it even more if I read the others that were before it. Normally I am turned off by 'out of this world' happenings but this one was casually written so that it didn't seem like it was such a big deal anyway that a lot of magical things were accepted. Glad you liked it too!
May 4, 2009 at 7:56 AM