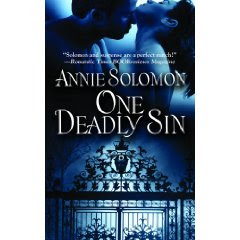 Courtesy of Anna with Hachette I have 5 copies of this book to give away to US or Canada readers. No Po Boxes.

To enter share with me your deadly pleasure. Leave a email address.

Hurry as this contest ends May 31st.

Edie Swann plans to seek justice for her father's death. She heads back home to Redbud. She is armed with a list of names and revenge on her mind. At first Edie's plan was to just leave a miniature nlack angel with each person on her list. The angel was to symbolize that she knows their hands are stained with innocent blood. It seems someone has other plans in mind. A plan that involves tring Edie's list into a kill list.

Sheriff Holt Drennen suspects something is up with Edie but he can't quite put his ffinger on it. One thing Holt does know is that he desires Edie, even if she speels trouble with a capital "T" First Holt has a responsiblity to the twon and its people. He has to stop a killer. As much as Holt doesn't want to beleive it, Edie just might be that killer as all the signs point to her.

One Deadly Sin starts out good and picks up speed, the further you get into the story. I first discovered Ms. Solomon when the cover for her book Deadshot caught my eye. Since then I have been wanting to read more by this author. Her latest release seemed just like the book to do so. Edie is this tough woman with a heavy burden on her shoulders and an angel in her pocket. Holt is the type of sheriff you picture when you think of small town cops. He sticks by the rules, except when it comes to Edie. Holt is the exactly who I would want watching my back. The chemisty between Edie and Holt was just right. I have to admit that my sin was that I read this book in one sitting.

Kristi said…
Deadly sin? hmmm - Love those margaritas! But I don't like to think of them as sin! :)

Lucy said…
Please enter me into your giveaway.
My deadly sin is driving fast on the route with 70mph speed limit. Especially with all the windows down and my hair just whipping around. I don't do it much but it is fun to me. Thank you for your contest.
makeupgirl21@comcast.net
May 8, 2009 at 5:43 AM

CherylS22 said…
My deadly sin would probably be potato chips (way too much salt for the old blood pressure!)

scottsgal said…
Would love to read this one! My deadly sin would be oreos dunked in milk!

Unknown said…
Deadly pleasure? Can you die from too much caffeine - because I love my coffee!