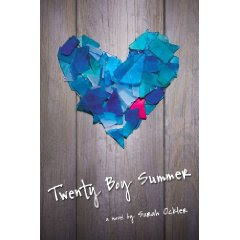 Twelve months ago, Anna Reiley and her friend, Frankie Perino were having the time of their lives together. Anna has developed a crush on Frankie's brother, Matt. Matt is seventeen and about to go off to college. Anna has secretly been wishing that Matt would kiss her. That wish comes true on Anna's fifteenth birthday. The kiss is the most wonderful thing that could ever happen to Anna.

Matt and Anna made a promise to each other that they would not tell Frankie about their relationship. That is only because Matt plans to tell Frankie during their family vacation as that is the best time. Frankie is fragile. Unfortunately Matt never gets a chance to tell Frankie. Matt, Frankie, and Anna had all went out for custard and on their way back, they got into a car accident. Frankie and Anna were the only ones to survive. Everyone around them says that they are very lucky but it doesn't feel like it.

A year has passed since the accident but Anna still misses Matt. The worse part is that Frankie still doesn't know about her and Matt. Anna has thought about telling Frankie many times but no time ever seemed like the right time. Frankie and Anna are trying to put the past behind them and what better way to do so then to spend twenty fun filled days in sunny California. Frankie comes up with a contest. While out in California, Frankie and Anna will have a friendly competition to see who can get the most boys interested in them. Anna agrees. Will this be the summer that Anna finds love again?

Twenty Boy Summer is a perfect summer read. Though this book may be catorgized as young adult, it can still be enjoyed by older readers as well. I felt for Anna and Frankie and what they lost and gained. It was interesting to see how the car crash changed both Anna and Frankie in different ways. The contest that Frankie and Anna had is age approriate and fun. Sarah Ockler has made a name for herself with this book. I cant wait to see what Sarah comes up with next.
Sarah Ockler

Bingo said…
Hi! Please come by BOOKIN' WITH BINGO as I have an award for you.
http://bookinwithbingo.blogspot.com/2009/05/literary-blogger-award-thank-you-wendy.html#comments
Thank you!
May 29, 2009 at 11:45 PM