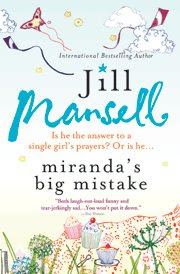 Miranda works at Fenn Lomax salon as a junior stylist. Poor Miranda though can't seem to do anything right. First she gives away one of the salon's client's money to a homeless man. Next she gives the homeless man a pair of very expensive gloves, only to have the rightful owner call to say he is coming to pick them up. Hey it wasn't Miranda's fault that the owner after six weeks all of a sudden decides he wants his missing gloves back. Though some miracle, Miranda's boss Fen Lomax tolerates all of Miranda's antics.

Chole Malone has just received the biggest shock of her life. She is pregnant. She and her husband never planned on having children but sometimes surprises can be a good thing...right? When Chloe shares the good news with her husband, Greg, he is anything but thrilled. In fact he is so irate that he packs up and ditches Chloe. But he does leave her the clock his grandmother gave them as he isn't a bastard that way.

While attending one of her friend's charity parties, Miranda meets the most handsomest man there. Instantly they experience a connection. HIs name is Greg. Will Greg end up being Miranda's biggest mistake yet?

Miranda is such a sweetheart. You won't meet anyone with a bigger heart then her. I can't get enough of her and all of her friends. Miranda may not see herself as star quality material but she is wrong. What a fun, flirty, fabulous summer read. Miranda's Big Mistake I can assure you will not be a mistake to read. The only mistake you will be making is if you don't read this book. This is the first time I have read anything by Jill Mansell and it won't be the last.
Jill Mansell