Let the Shadows Fall Behind You

May 05, 2009
I want to thank Kathy-Diane Leveille for sending me a copy of her book to review. 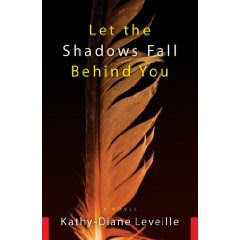 Brannaugh Maloney loved her boyfriend Nikolai "Nikki" Mirsky. Which is a good thing as Nikki also happens to be her boss. Nikki is a wilderness preservationist. Brannaugh works for him as a cataloguer.

Nikki will be going away for a week long conference. Instead of staying at the hotel with the rest of the attendees, Nikki will be staying at a cabin that his assistant, Alex Turner found. It is rumored that the cabin is haunted. Story has it that the cabin was built by a prospector for his mail-order bride. Ten months after the young lady arrived, the prospector vanished while out fishing. Brannagh has a bad feeling about Nikki staying at the cabin. Nikki assures her that nothing will happen to him.

Brannagh calls the hotel where the conference is being held to check in with Nikki. To her surprise the clerk tells her that there is no one listed in their system by the name of Nikolai Mirsky. Brannagh is now worried that something horrible has happened to Nikki. Brannagh files a missing person's report. Months pass and the authorities are no closer to figuring out what happened to Nikki then when he first disappeared.

Brannagh has just about given up on Nikki when one night while at her friend's house, she spots a man's face peering in the window. Brannagh swears the man looks exactly like Nikki. How can that be possible?

Let the Shadows Fall Behind You by Kathy-Diane Leveille is the first book I have read by this author. While this story had potential; there were also some factors that I had some issues with like when the storyline would lash back to explain how Brannagh met Nikki and what her childhood was like. This was all good as it helped piece together some of the characteristics of why Brannagh did the things she did but at the same time I found that I was given too much information. The back plot could have been shorten some. The one thing I enjoyed was when the story would switch between the past and the present. You could tell when this happened without any interruptions in the flow of the story. Overall I thought this book was a pretty good read.
Kathy-Diane Leveille

Julie P. said…
I'm reading this one right now. I have less than a hundred pages left and am curious to start finding out some secrets!
May 5, 2009 at 5:33 AM

kathy-diane leveille said…
Thanks for doing the review, Cheryl. I'm looking forward to the interview on your blog this week. I always like hearing feedback. This novel was written in the Canadian/British tradition of Andrew Pyper and Ruth Rendell with longer, layered characterizations. My next novel IN COLD STORAGE is written in the American tradition of the genre, faster paced with less poetry. I would love it if you reviewed it too, as it will be interesting to see the reaction to it. Happy Reading!
May 6, 2009 at 8:08 AM