The Four Corners of the Sky 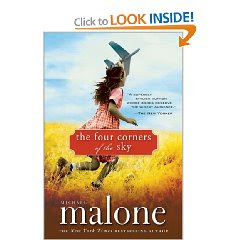 When Annie Peregrine was seven years old, her father Jack gave her a birthday to never forget. He dropped her off at her aunt's house in Emerald, North Carolina and he left her with a fixed-wing, single engine Piper Warrior called the King of the Sky.

Now years later, Annie is a grown woman and a Lieutenant Navy Pilot. She has flown some of the fastest air crafts in the world. She teaches other young pilots what she knows but there was a time when she herself was learning how to fly. The person who taught her was D.K. Destin, a retired Lt. US Navy pilot. No one could be prouder of Annie's accomplishments then her Aunt Sam and her Uncle Clark. OK, so Clark isn't really her Uncle but for all the years he has lived with her Aunt, he might as well be.

While heading home to Emerald for her twenty-sixth birthday, Annie receives a call from Miami Vice Detective Daniel Hart. He asks Annie if she knows where her father is as he is wanted by the FBI in connection with a missing relic. This relic comes from Cuba and the people there want it back. It is known as the La Reina Coronada del Mar otherwise known as the "Queen of the Sea". Annie tells Detective Hart that she won't recognize her father if he crossed her path. The funny thing is...Annie soon after receives a phone call from her father. He tells Annie that he is dying and that he wants her to fly the King of the Sky down to him. Annie doesn't know whether to believe her father about him dying but she has no choice but to see him. Her father says that if she does what he wants that he will tell her the name of her mother. Annie has always wanted to know who her mother is. Annie prepares for the journey of a lifetime.

The Four Corners of the Sky is a heart-felt story of love, loss, family and friendship. It has been a while since I have come across a book like this. Mr. Malone really knows how to tell a story. Instantly I was drawn to Annie. She has this innocents about her that is so enduring. This story will take you on an emotional roller-coaster of highs and lows but the best part of the ride is that when you are done with the ride you want to do it all over again. You will want to read and re-read this book. I can't believe I haven't read a Michael Malone book since now but I plan to rectify that be checking out his previous novels. The Four Corners of the Sky is a great read.
Michael Malone