Yesterday you got to learn a little bit about author John Knorle. Hopefully after reading his guest post you have already added his book to your list to read and if not after my review I hope you do add it. 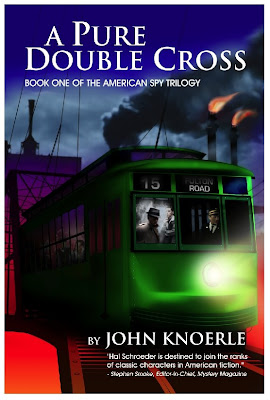 The year was 1945. Hal Schroeder used to be s spy for the Office of Strategic Services (OSS). Upon his return from behind enemy lines in Germany, Hal is so ready to relax; through he will miss the excitement that only a spy could relate to. Hal will have to wait to retire just a little longer. The FBI wants to recruit Hal for a bank heist. Yes, you did read right…the FBI is planning a bank heist, in fact a couple of bank heists. The plan is for Hal to integrate himself into the mob and steal the money. This way the FBI has some evidence to pin on crime boss Teddy Briggslavski otherwise known as Mr. Big.

At first Hal is reluctant to partake in any of the FBI’s dealings but after they sweeten the deal, Hal agrees. What the FBI or the mob doesn’t know is that Hal is about to engage in a risky bet and play both sides. Some people would call this a double cross. Will Hal’s plans pay off or has Hal gotten himself in over his head?

A Pure Double Cross is book one of the American Spy Trilogy. I really enjoyed reading this story. Hal was brilliant in his tactics and how he played both sides. One of the best parts was the twist at the end. Mr. Knoerle did a great job with this novel. He is a true, classic mystery fan’s dream. A Pure Double Cross brought me back to the good old times and helped remind me of why I love this genre. I plan to check out the rest of the books in this trilogy.

Cheryl said…
Thanks for the great review. I am definitely adding this to my wish list.