City of the Dead 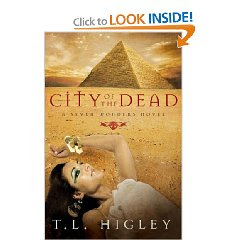 Hemiunu is a great architect. His latest project is building the Great Pyramid of Giza. His cousin is the Pharaoh of Egypt. So you can imagine the pressure to complete the pyramid and quickly, no matter what. Something happens to put a wrench in Hemi’s progress. Mentu-hotep the Overseer of Constructions has been found murdered. As much as Hemi would like to grieve he is on a strict time line, so he convinces Senosiris, the construction supervisor to take over as Overseer. A few days later; another body is discovered. This time it is the Pharaoh’s wife, Merit. It seems that both Mentu-hotep and Merit shared something in common. They along with Hemi, the Pharaoh and a few of their friends went many years ago on a hunting trip. Something happened on that trip that is now coming back to haunt them. It seems their secret is no longer hidden. Someone is killing them one by one. Hemi makes it his mission to locate and stop the killer before it is too late.

City of the Dead is book two in T.L. Higley’s The Seven Wonders series. I first discovered Mrs. Higley when I read the first novel in the series. Since then I have wanted to read the next book. What I like about this series is that the stories take you all over the world, during ancient times. The first third of the way into this book, I did find it to move somewhat slowly, even though two people had already been murdered. As I got further into the story it really started to pick up. This is because you were drawn in by Hemi and what happened on that day so long ago. The story would flash back revealing the events of the hunting trip. I can’t wait to continue my journey in T.L. Higley’s series.
T. L. Higley

Linda Jacobs said…
This sounds like a really cool idea for a series! History and entertainment all wrapped into one!
March 8, 2009 at 8:22 AM