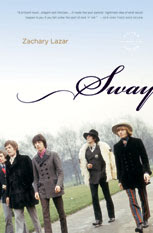 Three dramatic and emblematic stories intertwine in Zachary Lazar's extraordinary new novel, SWAY--the early days of the Rolling Stones, including the romantic triangle of Brian Jones, Anita Pallenberg, and Keith Richards; the life of avant-garde filmmaker Kenneth Anger; and the community of Charles Manson and his followers.Lazar illuminates an hour in American history when rapture found its roots in idolatrous figures and led to unprovoked and inexplicable violence. Connecting all the stories in this novel is Bobby Beausoleil, a beautiful California boy who appeared in an Anger film and eventually joined the Manson "family."With great artistry, Lazar weaves scenes from these real lives together into a true but heightened reality, making superstars human, giving demons reality, and restoring mythic events to the scale of daily life.

I am giving away courtesy of Hachette five copies of this book. Open to US and Canada. No PO Boxes. Ends April 3rd.

To enter leave a comment with your email address (1 entry)

Add my blog to your blog roll list (2 enteries)

Blog about this contest (every location earns you 1 extra entry)

Annie1 said…
Yessss, I would love to win this!

nfmgirl said…
I'd love the opportunity to win Sway! Please count me in. Thank you!

Julie said…
I would love a chance to win!
Cheers,
Julie

Amber said…
As a big Rolling Stones fan, I am very intrigued! Please enter me and thanks for the giveaway!
hurdler4eva(at)gmail(dot)com
March 16, 2009 at 11:06 AM

Erin said…
I would love for a chance to win this book! Thanks for such a great giveaway!

tracey said…
my husband would love this book

Vanessa said…
Please include me in teh giveaway.

Shauna said…
I would really like to read this book! That would be awesome! Please enter me :)
Tryingtostaycalm@gmail.com
April 3, 2009 at 8:48 PM