March 17, 2009
I want to thank Miriam with Hachette for letting me be a part of this blog tour. In honor of St. Patrick's Day and reading Galway Bay. I thought this poem seemed fitting to share.


They came from a land beyond the sea,
And now o'er the western main

From the sunny land of Spain.

Our destined home or grave?"

Thus sung they as, by the morning's beams,

The swept the Atlantic wave.

A sparkle of radiant green,

As though in that deep lay emerald mines,

Whose light through the wave was seen.

While bending to heaven, the warriors hail

That home of the brave and free.

Then turn'd they unto the Eastern wave,

Where now their Day-God's eye

A look of such sunny omen gave

As lighted up sea and sky.

Nor frown was seen through sky or sea,

Nor tear on leaf or sod,

When first on their Isle of Destiny 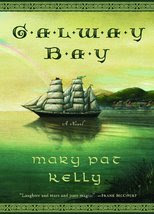 When Honora Keeley and Michael Kelly first met, it was love at first sight. Soon after they were married and starting a family. It was not easy. They grew as much food on their lands and they could. Michael would go out and work under any conditions…rain, snow, sleet, or sun. The elements got so bad that it wiped out almost their entire potatoes crop. They were down to barely eating much. It was important to Mary and Michael that their children were fed and grew up health and strong. Day after day Michael and Mary saw their good friends die. They knew they never wanted that for their children. They wanted them to have a chance at a good life.

When the war made its way to Galway Bay; Michael, Mary, her sister Maire, and their seven children between the two of them set sail for America. Sadly Michael met his fate with a watery grave. It was up to Mary and Maire to raise their children in this new land of opportunity. They did a fine job too. Their children grew up to help mold Chicago into the city it is now. The men go on to fight in the Civil War for Ireland’s freedom. They never forgot where they came from or who they were.

Galway Bay is a touching, soulful, powerful novel. You will be captivated by the words and characters. I dare you not to cry, smile, and cheer with the Mary, Michael and their family as they endure it all to become survivors. It was like I had gone back in time and could feel the earth between my fingers. Every little moment that the Kelly’s went through I was right there with them. If Mary Pat Kelly’s next novel is anything like Galway Bay then I highly anticipate the next release.


Great news! You can hear Mary Pat Kelly in a Blog Talk Radio interview at 11 AM ET Click here