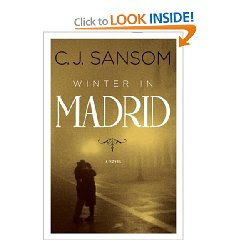 It was September 1940. A time when people could breathe again. The Spanish Civil War had ended. Leaving behind lost loved ones, strangers, and survivors are left to pick up the pieces in Madrid.

Harry Brett is a spy for the British Secret Service. After slowly recovering from a traumatic experience, he is sent to Madrid, Spain to seek out Sandy Forsyth. Sandy is a long time friend of Harry’s. He is also happens to be dealing in some shady business. Harry is charged with learning what he can about Sandy and the business he is dealing in. It seems though that Sandy isn’t the only one with something to hide. Sandy’s girlfriend and Ex-Red Cross nurse, Barbara Clare has a top secret mission of her own. To locate her old lover who disappeared on the battlegrounds of Jarama.

I enjoyed Harry, Sandy and Barbara. They had some good dimension and depth to them; they were not just one dimension. Winter in Madrid is like a beautiful tragic, love story filled with intrigue in the lovely location of Spain. C.J. Sansom transported me back in time. It was like I was walking the streets of Madrid. The only concern I had with this book was that it did move somewhat slowly for me. Also I do have to admit that I put it down a few times. This is one of those books you have to be in the mood to read. Let me tell you though that once you do pick this novel up, I think you will be drawn into the story. Mr. Sansom offers up some talent with Winter in Madrid.