February 16, 2009
A big thank you goes to author, Kim Hanks for sending me his book to review. 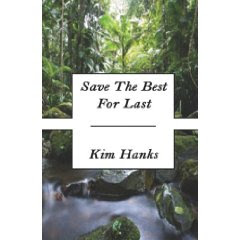 Many years ago in a oasis town something terrible took place. There were two men by the names of Zwick Lamps and Karl Hamilton. A horrific fire raged through the town and Zwick and Karl were both put on trial. Zwick was set free but Karl was convicted and beheaded.

Now present day, Zwick is reborn once again but this time he has supernatural powers that only one person knew about and that was Madam Tabitha. A woman who’s husband died on their wedding day. Zwick was not the only one who came back from the dead. An evil bangle arose from Karl’s body. It seeks revenge and destruction to all in the oasis town.

Zwick becomes attracted to a girl by the name of Whitney. Whitney and Zwick form a connection as they both have experienced tragedy. Whitney’s mother died in an accident. Everything is good till the one day when someone learns about Zwick and targets him. Now Zwick will do everything in his powers to keep history from repeating itself.

I did get a little confused at first by what was happening but that quickly went away as I got further along in the story. I could pick up on Mr. Hanks love for JK. Rowling’s Harry Potter books as some of that magic appeared in his novel. Save the Best for Last was filled with lots of magic, adventure and friendship. What a nice first novel from new author Kim Hanks. Save the Best for Last is the first novel in this series. Can’t wait to see how the series and characters play out.