February 12, 2009
I would like to thank Emily Bryan for sending me an ARC copy of her newest release to review. 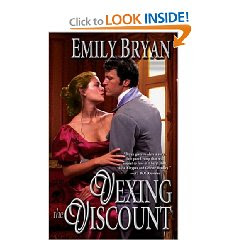 Daisy Drake is all grown up and sophisticated now. She is not the clumsy little girl that Lucian Beaumont, Viscount Rutland used to play with. Daisy is hoping Lucien sees that change in her, especially since she is the one that gave him the scar on his chin.

When Lucian is approached by Daisy, he is memorized by her beauty but that is before he hears why she has seeked him out. Daisy informs Lucian that she would like to fund his digging excavation to uncover Roman artifacts as long as she can come along on the site. Lucian flat out refuses Daisy’s offer.

Daisy comes up with the perfect plan to get Lucian to agree. She decides to dress and act the part of a seductive courtesan named Blanche La Tour. Will Daisy’s plan be a success or will it backfire on her causing her heartache?

It has been a while since I have come across a viscount that is as dashing, suave, and loveable as Lucian Beaumont. I had a great time observing Daisy switch back and forth between roles of playing Blanche and herself. Vexing the Viscount by Emily Bryan receives two thumbs up. This story goes down into my records as one of the best historical romances I have read thus far in 2009! I was so engrossed into reading that I went to turn the next page and realized there was no next page as I have finished the book. Thank goodness the next time I am looking for a romance to read, I know just where to go to find one.

Anonymous said…
I've seen this book advertised when I surfing the web, but never looked at it in any detail, thanks for the review! I love historical romance novels, but feel like I only ever read the "old school" ones by Jude Deveraux or Catherine Coulter and I'd like to give some newly released ones a try! Now I will start by checking out Emily Bryan.
February 12, 2009 at 5:14 AM

Anonymous said…
I love the "Old School" historicals to! My very first The Flame and The Flower, (Which I still have). There has been so much controversy over the "old" historicals being written with scenes that are demeaning to the heroine, Which I will add I do not condone, but sometimes we forget we read to ESCAPE reality! To immerse ourselves in another world! Emily does this so well in her writing! I am so excited she is mentoring aspiring writers like myself, it truly goes to show the grace and confidence she has in her work! I think I am going to be sad when blogging days are done! I am sure Emily, you will be relieved! LOL!!
February 12, 2009 at 12:00 PM