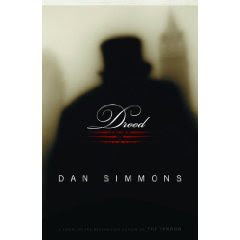 I am sure you have heard of this man…Charles Dickens. He was some kind of famous writer. Ok, yes I can see the light bulb shine bright. We have all read and heard about Charles Dickens and his live but how well did we really know about Mr. Dickens.

The date was June 9, 1865. A day that will forever change Charles Dickens. While traveling on a train to London with his mistress, the train goes off the tracks. Charles is lucky to have survived or is he? Charles swears that he met death that day. Soon after Charles Dickens becomes obsessed by the seedy underbelly of London. He is making secret trips at night to places like crypts. Charles takes on a different persona. What became of Charles Dickens? Well to find out from Dan Simmons’s version you will just have to read this book for yourself.

I first discovered Mr. Simmons, when I read The Terror. Even though the book weighted about a ton (ok, not really). I was so impressed by how much I got into the story. I don’t remember much as happening around me. All I knew was that I couldn’t stop reading. Drood is only the second book I have read by Dan Simmons but I plan to read all of this earlier books. Mr. Simmons is such a talented prolific writer that when I read his books I am transported immediately into his world.

What a liked the most about Drood was the unknown factor. The unknown and unexplained question about what really did happen to Charles Dickens in those last few years of his life? This story is narrated by Mr. Dickens good friend and collaborator. Wilkie Collins. I have to admit that I am not as familiar with Wilkie as I am Charles. I enjoyed the fact that by having Wilkie share his accounts of his time spent with Mr. Dickens I got to know him better. Charles Dickens might have seemed crazy but in his own personal way, he was a very deep thinker. Drood is dark, sinister, and ooh so inviting. I can’t wait to get my hands on his next book.

Kaye said…
Books that transport you into their world are absolutely the best! There is nothing like it. Sounds like you really enjoyed the story.
February 27, 2009 at 5:23 AM