Do you hear Voices? 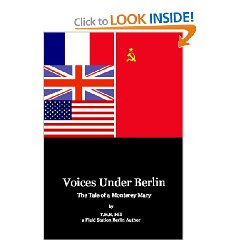 The whole story centers on the men in the tunnels but in particularly three men. There names are Kevin, a Russian transcriber, Blackie, the blackmarketeer and Lieutenant Sheerluck, the martinet. The tunnels were used so that cable-taps could be used to listen to the Soviets. As you could imagine, sitting in the tunnels all day with not much to you, you quickly find ways to entertain yourself. That is exactly what these men did. Have you ever listened to phone conversations between Soviets? It can be very amusing.

The Bookworm said…
not something i'd typically read, but it does sound interesting.
great review.