What evil awaits in Unboxed 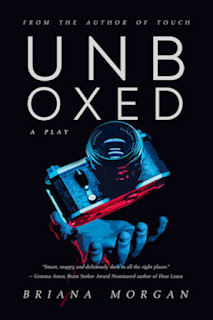 Greg Zipper is a paranormal vlogger whose livelihood relies on his online popularity. When a fight between him and his girlfriend goes viral for all the wrong reasons, Greg purchases a dark web mystery box in hopes of restoring his audience’s faith in him and hitting one million subscribers. But when Greg opens the box, he gets much more than he bargained for, including a Boxer who’s determined to stop him from taking his loved ones for granted. Now Greg must do all he can to stop the Boxer, or else he’ll lose his livelihood—along with the woman he loves.

I have read a few books in play format. They are unique and can add an element to a story. I was drawn to this book first by the book cover and second by the concept of the story. I got both the audio and ebook versions of this book. Which I started out with the audio version.

When I got to the halfway point of the audio book, I realized that I could not remember a thing that had happened. Therefore, I read the ebook as I thought maybe it was the narrator that might have been the issue. No, it was not the narrator.

Both Alice and Greg were not very likable. Greg more than Alice. The events that transpired after Greg opened the mystery box were not goosebump worthy to me. In fact, I found myself at times re-reading passages as I was like that is it. Overall, I liked the concept and the play format but not very scary to me.