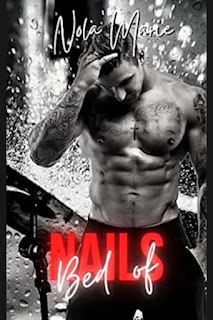 They say love is blind. But Dane and Cami are the ones with the vision problems, because everyone else can see what’s growing between these two. And it isn’t the friendship they keep claiming.DaneThey say all drummers are a little crazy. And when it comes to my overprotective nature, my sisters, and pretty much everyone else, agrees that I parted company with rationality long ago. But I can’t help it. I need to look out for the people I care about. And surprisingly, my best friend Cami, has made the top of that list. I’m trying to rein it in, but I know what her boyfriend is doing. When I catch him, I don’t know if anyone will be able to stop my need to keep her safe.CamiThey say most girls have a ‘type’. My type? Trouble. I’ve gone through d-bag after d-bag in my dating life, but I can honestly say, none have been as bad as my current boyfriend Travis. But they say love takes work, right? So I’ll keep trying to make things work until either Travis calls it quits or there’s nothing left to fight for. I just have to figure out why I spend every night dreaming about my best friend, Dane.These two proclaim they’re just friends loud and proud, despite what everyone around them thinks. Until suddenly, friendship isn’t enough, and Dane and Cami see what’s been right in front of them. But when Cami’s troubles gets out of hand, will her fighting nature and Dane’s protective streak be enough to protect her from Travis.

I really liked Dane and Cami together. They went from friends to lovers. Yet, it was a slow progression. This is because both did not want to ruin their friendship so they moved at a slow pace; in addition, Cami was in a relationship but it was an abusive one. While, Dane wanted to be Cami's savior he let her call the shots but being supportive all the way. This helped as Cami found the courage to be her own warrior and find her voice again.

I got to become more connected with Dane and Cami before they hooked up. So that when they did it felt so much more personal and heartfelt. Not to mention that it was HOT. Having read this book and book three, I plan to go back and read book one so that I can before better acquainted with the other characters.