The Girl Who Could Breathe Under Water 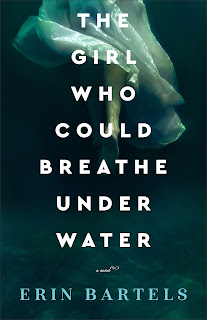 When Kendra Brennan moves into her grandfather's old cabin on Hidden Lake, she has a problem and a plan. The problem? An inflammatory letter from A Very Disappointed Reader that's keeping her from writing her next novel as long as its claims go unanswered. The plan? To confront Tyler, her childhood best friend's brother--and the man who inspired the antagonist in her first book--in order to prove to herself that she told the truth as all good novelists should.What she discovers as she delves into the murky past is not what she expected. Facing Tyler isn't easy, but facing the truth of her failed friendship with his sister, Cami, may be the hardest thing she's ever had to do.Award-winning novelist Erin Bartels searches the heart with this lyrical exploration of how a friendship dies, how we can face the unforgiveable, and how even those who have been hurt can learn to love with abandon.

I was intrigued by the premise of this book. Yet, I am sad to report that it did not engage me like I had hoped. The beginning was fine, but then it the story felt too drawn out. Thus the appeal of the mystery of what the truth was that Kendra could not remember was not that important to me anymore.

In addition, it did not help that I did not find any of the characters that interesting. Everyone kind of came off as monotone to me. In fact, I found after reading about two thirds of the book< i could not remember any details about what I had read. I picked up the book after a week and started at the beginning again.

I found that the second time around was not much better but at least I was remembering a bit better the story. Although, at times I did skim the book as well to make the story progress faster. It is a sad one but it also lends a nice voice to an important topic.