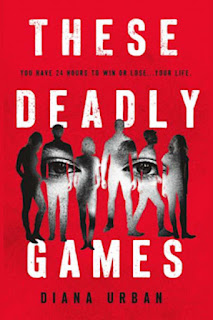 Let’s play a game.You have 24 hours to win. If you break my rules, she dies. If you call the police, she dies. If you tell your parents or anyone else, she dies.Are you ready?When Crystal Donavan gets a message on a mysterious app with a picture of her little sister gagged and bound, she agrees to play the kidnapper’s game. At first, they make her complete bizarre tasks: steal a test and stuff it in a locker, bake brownies, make a prank call.But then Crystal realizes that each task is meant to hurt--and kill--her friends, one by one. But if she refuses to play, the kidnapper will kill her sister. Is someone trying to take her team out of the running for a gaming tournament? Or have they uncovered a secret from their past, and wants them to pay for what they did...Author of All Your Twisted Secrets, Diana Urban’s explosive sophomore novel, These Deadly Games, is a must-read, propulsive YA thriller with deadly stakes, stunning twists, and a shocking ending you’ll never forget--perfect for fans of I Know What You Did Last Summer and One of Us Is Lying.

I feel in love with Diana when I read her first book, All Your Twisted Secrets. I could not get enough of that book. Thus, I was very excited to read her next book, These Deadly Games. So, while I did like this book, I felt that it moved at a much slower pace than the first book and therefore it took me longer to finish.

Where in the first book, all of the characters were more engaging, and the heightened intensity was stronger. In this book, the other characters did not really play a major role in the story. It was mainly Crystal against the kidnapper. I will say that the games that the kidnapper had Crystal play were no "kid's games".  Overall, I did like this book and do plan to read the author's next one.