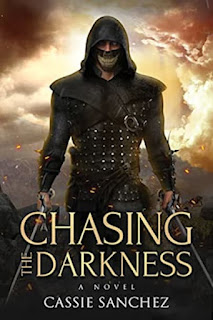 Chasing the Darkness is a story about vengeance and redemption and takes place in a land called Pandaren where there are two types of people - those with magic, Spectrals, and those without. Azrael, obsessed with revenge and power, undergoes a procedure giving him magic, but an unexpected side effect causes him to feel emotions he’s blocked for years. As an assassin and second in command of the Watch Guard, he has become a liability. Azrael is betrayed by his team and rescued by the people he’s hunted. He learns his beliefs and purpose are based on lies and has to choose the path of vengeance or the road to redemption. Chasing the Darkness entertains readers who enjoy character-driven stories with twists and turns. Chasing the Darkness is a fast-paced novel with magic, sword fights, and romance that keeps readers turning the page. The underlying themes, besides redemption, include forgiveness, sacrifice, and learning that one’s worth is not defined by one’s past.

I absolutely love this book. Instantly, I was drawn into this fantasy world that Cassie built. The story starts 0ut with just the right amount of backstory to allow readers to understand Azrael's mission and what he is up against. Which you know is going to be a wild journey as the Angel of Death has a conscience.

Cassie really infuses life and dimension to all of her characters. I was fully invested in everyone and how they interacted with each other. It was like there was a movie playing in my head as I was reading this book. My other favorites besides Azrael are brother and sister, Kord and Kenz. They help Azrael.

As another reader mentioned, it is hard to believe that this is Cassie's debut novel. It reads like her fifth book; thus it is no surprise this book is a finalist in the 2021 American Fiction Awards for Fantasy. Chasing the Darkness is not to be missed as Cassie takes readers on a journey that they will not soon forget with engaging characters!