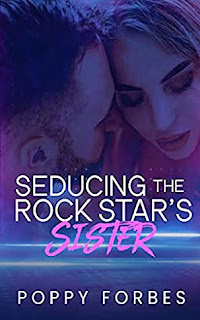 Bad boy rocker Mick Davies has been caught with his pants down far too many times. His bandmates are feeling the strain from their lead singer’s antics, leaving their label no choice but to send in a new tour manager in the hopes of getting control over the spiraling situation.

But Mick has other ideas.What better way to show his wild ways can’t be tamed than by seducing the manager’s sister-in-law? A charming smile, the heart of gold routine, and she would easily become Mick’s latest conquest.Or so he thought...Candice Bryan has had it with musicians. Her lead guitarist ex-boyfriend, Felix, made sure of that. She fell for his sweet and sincere act and had her heart shattered into a million pieces.Then she met Mick.His pick-up lines are played out. His seductive swagger is a joke. Yet it’s the vulnerability he shows in caring for his sister that melts Candice’s icy facade.But when the truth about Mick’s agenda comes out, Candice finds herself facing heartache once more. Will Mick choose love over spite? Or will he let his one chance at happiness slip away like a fading drum beat?

This story is filled with emotional characters. Mick, lead of The Falcons was a nice surprise. I was expecting him to be the ultimate bad boy but he actually was the bad boy that could change. He did show that when it came to Candice.

Speaking of Candice, I like that she was not like one of Mick's groupies and instantly fell for his charm. She did hold out for a good long time before she and Mick did hook up. Which, when they did, it was HOT. Yet at that point it also felt real and not just a fling.

Another couple I have to mention is Candice's older brother, Knox of The Hestons and his wife, Caroline. The reason I wanted to mention them is they were the other main couple and there was bad blood between Knox and Mick. Also, the next book will be about Knox and Caroline. I can't wait to read it. Seducing The Rock Star's Sister is a chart topping read!