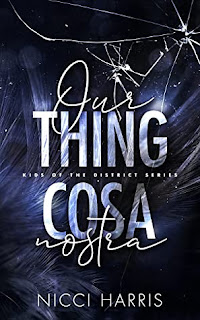 Cassidy Slater wants two things in life.
The first is to be the youngest leading ballerina in her academy. She will need unwavering dedication. No time for men. Unfortunately, her heart didn't get the memo, because her second secret want. . . is Max Butcher.

Max Butcher's scowl is notorious.
He has a dark intimidating presence, hinting at a life lived hard and fierce. He is the heir to an underground empire, and a man of few words, but his actions cut straight to the point.

To him, Cassidy is a silly little girl.
But one he can't keep his hands off.

Forced together, Cassidy will learn fast what it means to be wanted by a man like Max Butcher. And his world is going to intoxicate her. The ruthless bastards that he calls family - The Family - will want to use her, tutu and all.
But she is his now.

It's an eye for an eye where he comes from, and he's willing to blind the whole damn lot of them.
For her, he'll start a damn war.

Our Thing - The Ballerina & The Butcher Boy has been called Mafia Romance for Contemporary Romance lovers. This duet combines two books: Our Thing & Cosa Nostra. It is part of The Kids of The District series. You do not need to read book one in the series to enjoy this duet. It has a happily ever after. . . for these two at least. It features a powerful and moody hero and an endearing and determined heroine. Both main characters are possessive and fight for each other. It is an epic love story first. Word steam second. Violence, gore, and drama, third. Enjoy.

I just finished this duet. At 642 pages, it is a tome. Yet, so worth it and it will not even feel like it is that long. I thought the first story was great but the second half completed me. The first half tugs at your heartstrings and the second half rips them apart in a good way. I want to read Bronson's story as well as the other Butcher Brother books.

The chemistry between Cassidy and Max is so HOT. I could feel every emotion that they were going through as I was fully invested in the both of them. Cassidy and Max are kind of like Beauty and the Beast. Max is the ultimate bad boy but underneath all of that tough exterior does reside a beating heart. This duet is a five star recommended read.

unknown said…
Ripper Online is offering Home CCTV Security Systems in Australia. This is now east to find the best-value security camera systems which is designed to protect and efficiently monitor your property 24/7. You can make your oen solution of CCTV camera system as per your budget.

unknown said…
Ripper Online is offering Projector Roof Mount in Australia. No matter, whether you need a roof projector mount, we have a wide range of mount brackets available. Roof projector mounts are certainly a key component of a home theatre system.