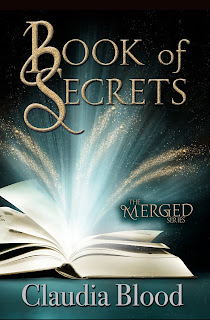 This is the first book in the Merged Series.

Fantasy - on the edge of urban fantasy - but in a world where myths and earth merged.
Trigger:  Violence (There is a mystery with death/murder)
Blurb:

Joshua Lighthouse never wanted to save the world, but now he has no choice.

Three hundred years ago, the human world and the world of Myth underwent a cataclysmic Merge. Those who survived – both human and Others – formed factions. Joshua led one faction, the Human Protection Agency, which is charged with maintaining the safety of the humans in his city. He secretly protects an artifact more powerful than even he knows…

The Book of Secrets.

As the anniversary of the Merge approaches, Joshua’s world is turned upside down, the order he’s maintained for so long is stripped away from him. He is kidnapped and betrayed, and a bounty is placed on his head.

On the run from the organization he once served and legions of Others who seek to kill him, Joshua is in a race against time to find the Book of Secrets and prevent the inter-species war that will end the world he knows forever.

Can one man find his way to salvation when everything he believed in turns out to be something else?

The Book of Secrets is an unrelenting page-turner that will keep readers on the edge of their saddles, an epic urban fantasy for fans of Rick Riordan.

This is a good start to this series. One that does have an intriguing storyline and world. It is the world that I thoroughly enjoyed. It is what sucked me in and kept me reading. I agree with another reader that the various, different characters were interesting. I have not heard of some of the species.

Right away I was pulled into this story. Joshua is the hero you did not know you wanted or needed. In regards, to the rest of the cast of characters; I did like them but was struggling a bit to form a strong connection with them. Thus, at times I did find myself going through the motions of reading but not absorbing what I was reading. Despite my lack of full commitment to this book, I did still like what I was reading and would read the next book as I do want to see how this series continues.

The chorus of birds echoing through the rookery walls woke Serene of the Pack. Voices of a community. Some of the Aeros joined in, their more human sounding voices adding a layer to the tribute to the sun that was about to rise.

She stared at the curved ceiling of the oval nest room and then stretched, transforming from her small furry wolf form to her human one.

The feathers in her nest acted as a soft caress. Many of the Aeros had donated feathers, treating her like a fragile nestling instead of a grown woman of another species. They’d ignored her wolf-like appearance and had accepted her. Gratitude warmed her heart. She would figure out a way to repay their kindness for protecting her for over a year.

Her gaze caught on the paper on the ledge. Wren’s guards had brought up the wanted posters from the HPA. The human protection agency only cared about humans. In theory anyway. They never seemed to be involved with anything good for any other species. She didn’t have to look at it to remember that the paper said she was number one on their list. She hadn’t expected the HPA to help her seek justice for her pack, but being on their most wanted list sparked a slow burn of anger deep in her belly.