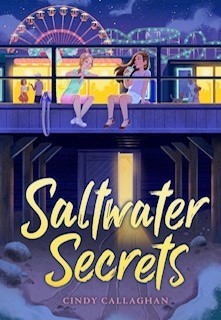 A story of two sisters, one summer vacation, and one big mystery for them to solve.Stella and Josie live for their summers at the boardwalk—each one a carbon copy of the last. Josie lives in Australia most of the year; her half-sister, Stella, lives in New Jersey. But every year, they come together for a beach vacation with their dad, and to make more memories. The real excitement for them is their secret special place under the boardwalk, where they hide their sister scrapbook, adding memories from each summer.But this summer feels different. Josie isn’t the same—she’s turned into one of the popular girls that Stella can’t stand. Despite the rocky start to their vacation, they still go to their secret, special place under the boardwalk, adding memories to their sister scrapbook once again.That is, until their place is discovered by the owners of the newest store—the Smoothie Factory, which replaced Josie’s favorite sweet spot. Not only have the owners of the Smoothie Factory discovered the cove, they are exploiting the natural habitat, and endangering marine life and everyone at the beach! It’s up to Josie and Stella to figure out how to stop their beloved boardwalk from disappearing for good.

Stella and Josie make good main characters. Teens going through puberty will relate to the dynamics of Stella and Josie. They are very relatable to teens. Why I could not relate so much is because of the dialect of the characters was juvenile. As the police even reacted the same as an adult trying to get the facts about the case, not who liked who or what someone was wearing.

Where the mystery was involved. It did seem to take a really long time to get to the case. It did not really come together until the last third of the story.

This is is a cute book. While, I did like it, I would have to say that the target audience of a younger reader is the right choice. Which, young teens could read this as there is no language or sex portrayed in this book. So, this is a clean read.

Mystica said…
It is nice that you read books and review them for younger readers as well as this could then be recommended reading for them.
July 18, 2021 at 8:21 AM