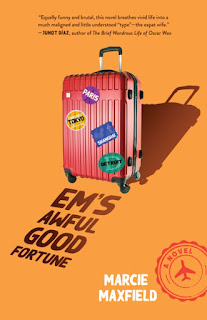 Part dysfunctional marriage, part global romp, this is not your typical expat story. Em’s Awful Good Fortune is a deeply personal, marriage-coming-apart-at-the-seams look at the struggle between a woman’s desire for partnership and her need for identity. Fueled by twin demons, love and rage, Em stomps her way around the world, coming to terms with the fantasy of having it all: husband, kids, and a career. Em is not just married; it’s more like being handcuffed to her husband’s international career. Her life reads like a fantasy, bouncing between Los Angeles, Paris, Tokyo, Shanghai, and Seoul. But the good fortune is all her husband’s; Em is just the tag-along wife.Marcie Maxfield’s compelling, non-linear story explores the expatriate lifestyle through the lens of a crumbling marriage, while at the same time tracing the lasting impact of sexual assault and post-traumatic stress disorder. Em’s journey exposes the dark corners of this seemingly privileged world: loneliness, depression, infidelity, and loss of career. As she begins to value her needs before those of her husband’s career, she stops letting herself be dragged along for the ride—and ultimately emerges triumphant.

I have heard the words "tagalong wife" before a couple of times. This book really portrays the meaning of it. Depending on the situation of the relationship; it can either be a good or bad thing. In Em's case, it was a bad thing. The disconnect between Em and Gee was uncomfortable. Yet, a real part of a relationship.

I get where Em did not really feel like she had a voice to speak up but on the other hand; I really found myself yelling at Em to speak up and stand up for herself.

This is a quick read. I did like all the traveling to the various locations. I definitely felt like a jet setter. Yet, I did struggle with the emotional connection with the characters but this does not mean another reader won't connect better to this book. So do give it a try.