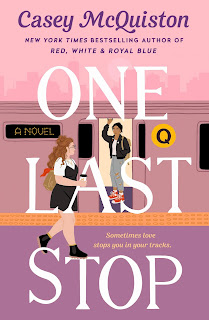 For cynical twenty-three-year-old August, moving to New York City is supposed to prove her right: that things like magic and cinematic love stories don’t exist, and the only smart way to go through life is alone. She can’t imagine how waiting tables at a 24-hour pancake diner and moving in with too many weird roommates could possibly change that. And there’s certainly no chance of her subway commute being anything more than a daily trudge through boredom and electrical failures.

But then, there’s this gorgeous girl on the train.

Jane. Dazzling, charming, mysterious, impossible Jane. Jane with her rough edges and swoopy hair and soft smile, showing up in a leather jacket to save August’s day when she needed it most. August’s subway crush becomes the best part of her day, but pretty soon, she discovers there’s one big problem: Jane doesn’t just look like an old school punk rocker. She’s literally displaced in time from the 1970s, and August is going to have to use everything she tried to leave in her own past to help her. Maybe it’s time to start believing in some things, after all.

Casey McQuiston’s One Last Stop is a magical, sexy, big-hearted romance where the impossible becomes possible as August does everything in her power to save the girl lost in time.

In the beginning, it was slow listening for me. I did the audio version of this book. So slow that I was almost done with listening and this was only after a third of the way into the book. Yet, I decided to stick with the book a bit longer. So glad that I did as my feelings with towards this book did an upward tick of excitement.

To be honest, if it was not for Jane and August's other friends, I probably would have forgotten about August. She was not the most interesting person but she did open up and start to blossom as the story progressed. Jane is so cool that she is too cool for me. I was a nerd back in the day and would have had reservations like August. It may have started out as "just research" but it ended in love.

If you are a reader who has wanted to try a LGBTQIA book, than here is your chance. This one is not in your face but sweet and charming. The case of characters are a bit quirky and people that I would want to hang out with.