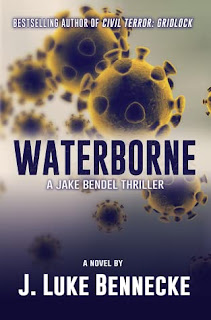 When Californians start getting sick with flu-like symptoms, traumatized engineer Jake Bendel is once again forced to work with the FBI to discover the cause. With his new desalination plants behind schedule and searing pressure from the California Governor, Jake uncovers a secret network of vengeful terrorists planning catastrophic genetic modifications.

But before the engineer can find a way to cure the masses, he himself is injected with the virus, forcing him to dig deep to track down the leader of the terrorist group. Using strength from recent losses in order to save the lives of millions, Jake overcomes drone strikes and bunker bombs to discover the mastermind behind the plot, but not until the very end does he realize he’s been chasing someone who can’t possibly be caught.

This is the second Jake Bendel book I have read. I have to admit that the first book, Civil Terror: Gridlock was good but I struggled with it a bit. Yet, there was enough good aspects of the book that I wanted to read the next book in this series. Thus, here I am.

There was something different this time about reading this book from the first one. I was really gelling with this book. In fact, I finished this book within a couple of days. The dynamics between Jake and Viktor keep things on high impact. A very dangerous game of cat and mouse.

Although, not required but you should read the first book to really understand the past history between Jake and Viktor. Viktor is a tormented psychopath hellbent on ruining Jake's life. I can't wait for book three. 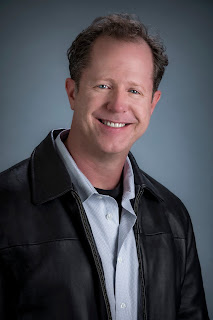 J. Luke Bennecke is a native Californian and veteran civil engineer. His first book, Civil Terror: Gridlock, became an Amazon Bestseller. Bennecke currently resides in Southern California with his wife of 30 years, whom he enjoys traveling with, and three spunky cats. Waterborne is his second novel.

Mass murder can be complicated. And profitable.

From a vacant corner of the Chili’s parking lot, behind a four-foot-high wall of cropped manzanita shrubs, Gunther Pertile scanned the area for civilians. Not a soul in sight. He whipped out his Glock 9mm—with suppressor—aimed at each of the two main overhead lights and squeezed off a couple of muffled rounds. Glass shattered, falling to the ground as the entire scene went dark.

He dismounted his jet-black Harley, then slid off his helmet to reveal the short, curly hair he’d recently bleached so he would no longer be the dark-haired, dark-eyed killer on the FBI’s most wanted list.

Running his fingertips along each of the four loaded mags inside the pocket of his black leather jacket, he calculated the time to empty the extra sixty rounds. At three rounds per second and another three seconds to swap each mag, he could finish in just over half a minute.

One dead every half a second. Not bad.

But after dwelling on the fantasy of a mass shooting and bringing himself back to reality, he took a deep breath and enjoyed the security his weapon provided. After two decades as a sniper, he knew with one hundred percent confidence tonight’s job—his actual job—would get done. Piece of cake.

With his weapon holstered, he slid through the front door of the restaurant and took a window seat.

A flash of blue pulled into the parking lot. The target, a civil engineer named Jake Bendel, exited his Tesla and walked toward Chili’s carrying a laptop, several rolled up sheets of paper, and a three-ring binder. Once inside, the hostess guided him to a booth on the opposite side of the room, where he ordered dinner and began to work, checking his watch every few minutes.

Eventually, the target’s food came and he ate—still checking his watch. Gunther smiled.

The other members of the assault team had already taken care of Dave, Jake’s friend. The man wouldn’t be dining at Chili’s tonight. Or anywhere ever again, for that matter.

Gunther finished his water, squinted, bared his teeth, then set the glass down.

He dug a hand into his pants pocket and wrapped his fingers around a syringe filled with enough Trihypnol to subdue a professional wrestler. With the quarter-inch-long needle capped at the tip, he’d avoid accidentally injecting himself with the hypnotic drug.

Trihypnol was the perfect concoction for this abduction. Once administered, the victim would remain fully awake, but in a highly suggestible and altered state of consciousness—alert and fully mobile for up to four hours. The famous Dr. Jake Bendel would later crash like a pelted pigeon and sleep for half a day, with zero memory of tonight.

Bendel stuffed the last piece of halibut into his mouth, chewed, and washed it down with a final swig of beer.

Writing Services UK said…
The thesis has been written exceptionally well, however it still needs a little more profound research to make it an enriching thesis. If you have been struggling to research well, do not worry, as we at LiveWebTutors enable it for you. Feel free to contact us anytime for Online Thesis help.
April 23, 2021 at 1:19 AM