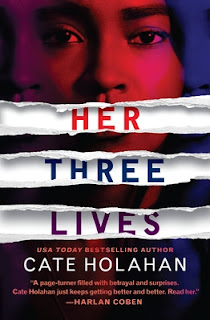 Jade Thompson has it all. She’s an up-and-coming social media influencer, and she has a beautiful new home and a successful architect for a fiancé. But there’s trouble behind the scenes. To Greg’s children, his divorce from their mother and his new life can only mean a big mid-life crisis. To Jade, his suburban Connecticut upbringing isn’t an easy match with her Caribbean roots.

A savage home invasion leaves Greg house-bound with a traumatic brain injury and glued to the live feeds from his ubiquitous security cameras. As the police investigate the crime and Greg’s frustration and rage grows, Jade begins to wonder what he may know about their attackers. And whether they are coming back.

As Greg watches Jade’s comings and goings, he becomes convinced that her behavior is suspicious and that she’s hiding a big secret.  The more he sees, the more he wonders whether the break-in was really a random burglary. And whether he’s worth more to Jade if he were dead than alive.

This book started out with a big bang. It definitely got my attention. From there I was hooked and could not stop reading. While, I still read this at a very fast pace, I found the overall vibe of the story kind of predictable. Yet, this book is still a good read. One that I don't regret reading.

Can we speak about all the players in the story. You have Jade, Greg, his family, and the detectives. I had mixed feelings when it came to Jade and Greg. The rest of the characters I did not much care for. Greg's family was really bitter towards Jade thus making me off put by their sour attitudes. In regards, to the detectives, they seemed to not be very prominent in the story. More like third level characters. I was not a fan of Jade in the beginning but as I got to learn more about her, I slowly moved to her side. Greg was the opposite. I was for him in the beginning but not in the end.