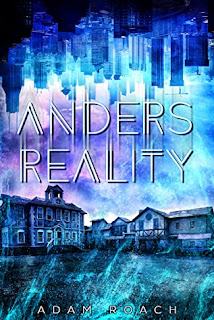 What if for some when they sleep, they don’t simply dream, but fall into a whole other world?

For the past six months, Ander has been having nightmarish daydreams where horrific creatures are trying to kill him and his only reprieve are his dreamless nights.That is until his 14th birthday.

Shortly after drifting off to sleep, he feels like he’s falling and lands in an abandoned looking world. Ander comes to learn he is from a select line of people called Dreamers. A gift inherited from a parent with the charge of protecting this world called Luceria. The once beautiful and magical world is in danger from a fellow Dreamer and the army he has created. Going by the name of The Taker, he will stop at nothing to find the key which he believes will unlock Luceria's magic and allow him to take over and rule the land.

Can Ander find the key first and stop The Taker? Will he have the strength to embrace who he is meant to be and become the one to save Luceria?

Anders Reality is the first novel in an exciting and unique middle grade urban fantasy series by Adam Roach. If you like fascinating creatures in worlds you wish you could visit, surprising plot twists and a driving storyline you just can’t put down till the last page, you’ll love Anders Reality.

The age range for this book is 10-18. I would actually move it up a bit to 13 maybe 14. This is because of a few factors...the opening scene involving The Taker and his creatures, which they make appearances a few more times in the story and due to the age of Ander. He is fourteen, so the way he talks and acts would be more relatable to readers closer to his age.

Being outside of the targeted age range, I liked this book. My feelings with it really had a little to do with the age of the characters but more around the layout of the story. The first third of the story I was really jiving with it. Yet, when Ander made the jump to visiting Luceria; I wanted him to spend more time there getting to know the people and Luceria. what a dreamer was all about, and what happened to his father. Don't get me wrong as all of these things are revealed along the way in the story. I just would have liked to have spent a bit more time acclimating myself to this other world and the other characters then to just have a quick moment like blink and you missed it. The rest of the story was kind of like that. It would flash back and forth really fast.

The chapters are short so you really did not have much time to some times comprehend which had just happened before something else was happening.  Yet, this is a good book. It is one that I do think the younger reading audience would like if they are a fan of fantasy books.