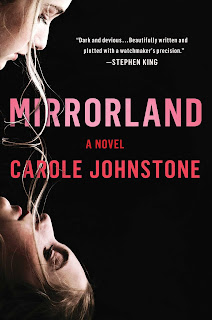 With the startling twists of Gone Girl and the haunting emotional power of Room, Mirrorland is a thrilling work of psychological suspense about twin sisters, the man they both love, and the dark childhood they can’t leave behind.

Cat lives in Los Angeles, far away from 36 Westeryk Road, the imposing gothic house in Edinburgh where she and her estranged twin sister, El, grew up. As girls, they invented Mirrorland, a dark, imaginary place under the pantry stairs full of pirates, witches, and clowns. These days Cat rarely thinks about their childhood home, or the fact that El now lives there with her husband Ross.But when El mysteriously disappears after going out on her sailboat, Cat is forced to return to 36 Westeryk Road, which has scarcely changed in twenty years. The grand old house is still full of shadowy corners, and at every turn Cat finds herself stumbling on long-held secrets and terrifying ghosts from the past. Because someone—El?—has left Cat clues in almost every room: a treasure hunt that leads right back to Mirrorland, where she knows the truth lies crouched and waiting...A twisty, dark, and brilliantly crafted thriller about love and betrayal, redemption and revenge, Mirrorland is a propulsive, page-turning debut about the power of imagination and the price of freedom.

This book is right up my reading wheelhouse. Thus the reason I was really excited to read it. I would classify this book as a psychological thriller but it was more on the milder side for me. Why I say this is because the first third of the story, I felt like I was more just kind of in the action of reading the book but not nothing was grabbing me and making me engaged with it. The pacing and intensity did pick up the further I got into the story. Something changed and the latter half of the story was a different vibe. I was into it and could not stop reading.

Mirrorland sounded like both a nightmare and intriguing place. It is no wonder that El and Cat were torn about Mirrorland. It was filled with an evil pirate, Blackbeard, and Clown to name a few but it also had good people like Mouse.

Now that El is missing, Cat will be forced to revisit Mirrorland. She will have to confront her fears if she wants to learn the truth about what happened to her sister. I will tell you that I did not see how this story was going to play out until the author wanted me to. This is so refreshing as it has been a while since I have been stumped about the plot of the story. It is hard to believe that this book is Carole Johnstone's debut novel. She already is showing she is a force to be reckoned with her debut novel, Mirrorland!