The Sound Between The Notes 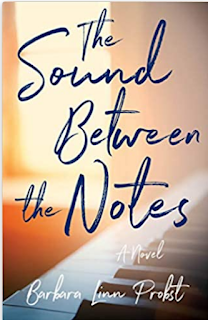 The highly anticipated new novel from the multiple award-winning author of Queen of the Owls . . .What if you had a second chance at the very thing you thought you’d renounced forever? How steep a price would you be willing to pay?Susannah’s career as a pianist has been on hold for nearly sixteen years, ever since her son was born. An adoptee who’s never forgiven her birth mother for not putting her first, Susannah vowed to put her own child first, no matter what. And she did.But now, suddenly, she has a chance to vault into that elite tier of “chosen” musicians. There’s just one problem: somewhere along the way, she lost the power and the magic that used to be hers at the keyboard. She needs to get them back. Now.Her quest—what her husband calls her obsession—turns out to have a cost Susannah couldn’t have anticipated. Even her hand betrays her, as Susannah learns that she has a progressive hereditary disease that’s making her fingers cramp and curl—a curse waiting in her genes, legacy of a birth family that gave her little else. As her now-or-never concert draws near, Susannah is catapulted back to memories she’s never been able to purge—and forward, to choices she never thought she would have to make.

This book is my first introduction to this author. I did like this book and would read another book by the author. The overall story was lovely. It spoke of choices and how those choices had consequences and the value of family.

I did feel connected towards Susannah and her circumstances. As someone who is adopted, I could easily understand Susannah's feelings when she found out she was given away to be adopted. I have loving parents that I am grateful that they did adopt me. Unlike Susannah, I have never felt the need or desire to want to seek out my real birth mother.

Susannah's story is actually a sad one. Thus when she finally rises above the past and focuses on her future and her own family; there is a moment of happiness. While, I did like this story and was really into it for some reason at the half way point I lost some of my excitement about it. The latter half seemed to feel like it was moving at a slower pace. Overall, though I did find this book to be a nice read.

Barbara Linn Probst is a writer of both fiction and non-fiction, living on an historic dirt road in New York’s Hudson Valley. Her debut novel Queen of the Owls (April 2020) is the powerful story of a woman’s search for wholeness, framed around the art and life of iconic American painter Georgia O’Keeffe. Endorsed by best-selling authors such as Christina Baker Kline and Caroline Leavitt, Queen of the Owls was selected as one of the 20 most anticipated books of 2020 by Working Mother and one of the best Spring fiction books by Parade Magazine, and a debut novel “too good to ignore” by Bustle. It was also featured in lists compiled by Pop Sugar and Entertainment Weekly, among others. It won the bronze medal for popular fiction from the Independent Publishers Association, placed first runner-up in general fiction for the Eric Hoffer Award, and was short-listed for both the First Horizon and the $2500 Grand Prize. Barbara’s second novel, The Sound Between the Notes, is slated for publication in April 2021. Like Queen of The Owls, it shows how art can help us to be more fully human. Barbara has also published numerous blogs on the craft of writing on award-winning sites such as Jane Friedman and Writer Unboxed. To learn more about Barbara and her work, please see http://www.barbaralinnprobst.com/. She resides in New York.
Barbara Linn Probst

unknown said…
weblancerz offers Best Web Development services in DMV to enhance your online presence. They use creativity and innovation to satisfy requirements

unknown said…
weblancerz is one of the best mobile app development company in DMV to help your brand create applications that are going to sell and make a mark.

unknown said…
Weblancerz is offering the ui ux design services in DMV. Our team is fully equipped with the latest tools and technology such as Adobe, Photoshop, Adobe Illustrator, HTML5, CSS#, iOS interface builder, and much more.

Google AdSense said…
Great Thanks! Are you a blogger and want to know Ways To Make Money From Blogging
May 11, 2021 at 2:22 AM

David Stangley said…
Pretty good post. I have just stumbled upon your blog and enjoyed reading your blog posts very much. I am looking for new posts to get more precious info. Big thanks for the useful info.

David Stangley said…
Thank you for some other informative website. The place else may just I get that kind of information written in such a perfect method?

David Stangley said…
Hi there! Nice post! Please tell us when I will see a follow up!

David Stangley said…
Wonderful blog! I found it while surfing around on Yahoo News. Do you have any suggestions on how to get listed in Yahoo News? I’ve been trying for a while but I never seem to get there! Appreciate it.

Unknown said…
Pretty good post. I have just stumbled upon your blog and enjoyed reading your blog posts very much. I am looking for new posts to get more precious info. Big thanks for the useful info. Wholesale Women Joggers UK
Men Joggers Wholesale Prices
June 30, 2021 at 11:36 PM

Agent Host said…
Awesome blog!! Thank for providing excellent information. Actually quite helpful data accessible here. If you are looking for assignment help then you can visit our site.... best smm services
ppc management new york
July 1, 2021 at 1:53 AM

unknown said…
Dev Links is offering Web App Development Services in UAE. Our team is committed to offering robust and top-performance software, mobile apps, web development, and web apps services. Our cutting edge solutions are up to the mark and result-oriented

unknown said…
Dev Links is the leading Software Development Company in UAE. We are dealing in Payroll, Time & attendance, Performace and any custom software required by a specific company or firm.

David Stangley said…
Do Online Shopping in Pakistan from Pakistani best shopping brands and find your desired products from brands at reasonable price.
July 15, 2021 at 6:25 AM

David Stangley said…
Buy Dresses for women from Pakistani best lawn collection and find your desired products at reasonable price.
August 4, 2021 at 4:35 AM

Aleena said…
We at Learn Quran USA provide you and your kids with a great opportunity to Learn Quran Online with Tajweed at home conveniently. Book Your Free Trials Now.
learn quran with tajweed
online quran classes for kids
online quran academy
January 22, 2022 at 12:03 AM