How the Cowboy Was Won 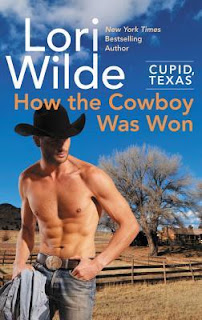 Return to New York Times Bestselling Author Lori Wilde’s beloved town of Cupid, Texas, where wedding fever is in the air . . . and two best friends discover that sometimes the perfect match is standing right in front of you . . .

Ember Alzate is a fantastic matchmaker with one big problem: she can’t find the perfect mate for herself! Alzate family legend says that when she kisses “the One” she’ll hear a mysterious humming in her head. Well, Ember’s kissed a lot of guys and she’s never heard a thing. Now, instead of searching for herself, she vows to find her best friend, Ranger Lockhart, a bride. It’s clear this smart, sexy man just needs to meet the right gal.

Ranger’s returned home to Cupid with marriage on his mind, but he’s not interested in the parade of women Ember pushes under his nose. His thoughts keep returning to his best friend—with her combustible combination of curves and sass. No one compares to Ember, but what’s it going to take to convince her she’s the woman for him?

I found this book to be charming and witty. I enjoyed getting to know Ember and Ranger. Ember is fun and full of personality. I just wished that it was bigger. Well I take that back as it was big but it was not portrayed in this story as larger than life. That is what I was craving. Yet, Ember was still great and someone that I would want to hang out with.

On the other hand, Ranger is more on the reserved side. He is better when it comes to being in the lab or being behind the scenes. In other words, Ranger is not just a pretty face. He has brain smarts as well.

While, both Ranger and Ember liked each other, they did not make any moves towards one another until about the half way mark. Until then, it was just fun but without much of chemistry. Overall, this was an enjoyable read. Which, if you are just checking this series out for the first time, this book may have you wanting to read the other novels in this series.
Lori Wilde