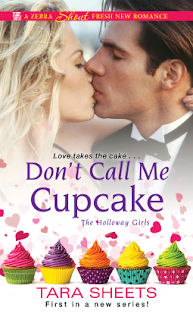 There’s a very special kind of sweetness to life on Pine Cove Island . . .
Most families have a favorite recipe or two, handed down through generations. The Holloway women are a little different. Emma Holloway, like her grandmother before her, bakes wishes into her delicious cupcakes, granting the recipient comfort, sweet dreams, or any number of good things. It’s a strange gift, but it brings only happiness. Until gorgeous, smooth-talking newcomer Hunter Kane strolls into her shop, Fairy Cakes—and Emma makes the mistake of selling him not one, but three Sweet Success cupcakes.

Hunter, it turns out, is opening a fancy new restaurant and bakery right on the waterfront—Emma’s competition. To make matters worse, the town committee has decided to split the upcoming summer festival contract between the two, forcing Emma to work with her nemesis. But she can’t afford to split her profits. The solution: create a recipe that will make Hunter leave town permanently.

The Holloway charms are powerful. But there are other kinds of magic in the world—like red-hot first kisses, secret glances, and the feeling that comes with falling truly, madly, inconveniently in love . . .

This is a charming read. I was only slightly disappointed in the book. I felt it a little too light on the romance and the plot. Yes, this book is more then just about "cupcakes". There is another part to the story that was obvious. However, the cherry on the top is the humor.

There is Emma, Hunter, Emma's cousin, Juliette, and Mrs. Mooney and Mr. Bonbon (the dog). Emma seemed like such a sweet woman but she had a spark to her. I think back to her first encounter with Hunter after she found out who he was. How angry she got when she confounded him; especially after she sold him several "good luck" cupcakes.

Hunter just knew how to push Emma's buttons but without going too far. He was charming. Then you throw in a dash of Juliette and Mrs. Mooney and Mr. Bonbon and you do get a sweet and fun read.
Tara Sheets