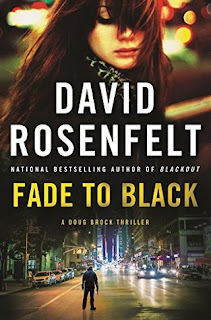 In Fade to Black, the thrilling sequel to Blackout from David Rosenfelt, policeman Doug Brock helps a fellow victim of amnesia untangle a murder case and discovers he may not be as distant as he thinks.

After getting shot in the line of duty, New Jersey state police officer Doug Brock has been busy rebuilding his life. He’s reunited with his fiancé and started to get some of his memories back. He hopes he can continue to recover with the help of an amnesia support group and that the damage from his past isn’t permanent.

It isn’t until fellow group member Sean Conner approaches him after a meeting that Doug realizes the trouble is just beginning. Sean has discovered in his attic what can only be called a scrapbook of a murder victim, but he has no recollection of the girl’s identity or why he might have gathered this information. Doug agrees to help and convinces his captain to open what had been a cold case. When he discovers that he had a personal connection to this case, suddenly he’s questioning everything he thought he knew about the case, about Sean, and about his own past.

In the next page-turning thriller by David Rosenfelt, Doug Brock is back to delight readers and keep them guessing until the end.

I haven't read a book by this author but my friend has and she loves Mr. Rosenfelt. Having not read the prior novel, I only felt a slight disadvantage in reading this book. This was only in the character development aspect. The rest of the story was fine. My connection towards Doug was good but it was not strong. It might have been a little better had I read the prior novel. Although, what he went through in the prior book didn't affect me with this one.

The pacing went by fast with this book. Yet, part of it had to do with the fact that the chapters were short. There was not a lot of un-necessary conversation to bog down the storyline. However, I found most of the characters unmemorable. Also, I didn't pick up on a lot of humor. This is what I was looking forward to the most as my friend loves the humor Mr. Rosenfelt brings to his books. While, this book did not score a major hit with me. I do plan to check out other prior novels.
David Rosenfelt