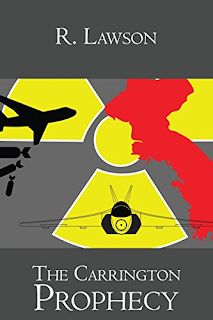 Biff Roberts, the CIA's counterterrorism director, receives actionable intelligence that a rogue regime is planning a sneak attack with the goal of exploding a nuclear device above the United States, triggering an unnatural Carrington Event.

The cosmic storm of the Carrington Event’s electromagnetic pulse waves released by the explosion would cripple all electronic systems and power grids in the U.S., leaving the homeland defenseless and vulnerable to conventional warfare.

With North Korea looking to be the most likely suspect, Biff is tasked to intervene and prevent this attack without setting off a global world war. Collaborating with NIS, the South Korean Intelligence Service, Biff and his team work to thwart the impending disaster, while also leaving the CIA with plausible deniability.

This is the second book I have read in this series. Having gotten to briefly know Biff, I was instantly engaged in him in this book. As well as the rest of his team. There is a good dynamic with Biff and his team.

What worked the most for me this time was that there was really only one enemy to deal with than several. So, there story felt more focused. Which helped me to stay more engaged in the story. Yet, just like the prior novel, it did take me some time to get on board with this book. Despite the fact that this is one of my favorite type of genres to read. The further I got into the story the more that was happening. Sometimes when there was more talking than action I did lose focus but was able to get that back. If you like international thrillers you may want to check this series out.

About the author:
R. Lawson has always been fascinated with international intrigue and the inner workings of secret government agencies and their activities. R. Lawson is a retired vascular surgeon and served as a captain in the United States Air Force as a flight surgeon. With over 120 academic works under his belt, he moved into the fiction genre and began writing thrillers with a focus on terrorism, cyber-warfare and more.
For more information: www.rlawsonauthor.com
R. Lawson