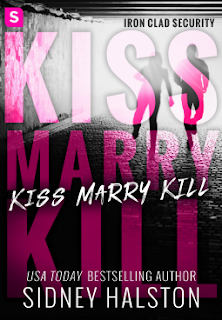 He's been chasing a memory . . .
It was just supposed to be a regular Thursday afternoon…and then he saw her. Sitting in seat L214, one seat over from his at the baseball game, right next to her douche of a soon-to-be-ex-boyfriend. An impromptu kiss for the kiss cam, and Jax knew his life would never be the same. Five years and a tour in Afghanistan later, Jax is back stateside running his own private security firm, Iron-Clad, with his best friend. He isn't the man he used to be... but Megan isn't the sexy and sweet, though sheltered, twenty-two-year-old he left behind, either. And she's in trouble.

...but now they're on the run.
Megan Cruz has made something of herself. She’s turned her dreams of pop stardom into a reality. But when a deadly stalker breaks into her home claiming to be her number-one fan, the only person she can turn to is the boy who got away. But Jax isn’t the same carefree charmer who stole her heart, then broke it when he joined the military. This man is seductive, hard, guarded. And he'll do anything to protect what's his.

I was drawn to this book by the title. This is the first book in the Iron Clad Security series. I did like the start of this series. For a first book, this does show promise of a good series. Sadly, what I was missing was the high suspense intensity levels. On a scale of 1-10, I would rate the suspense a 3. It was there at the beginning with Megan's stalker. I felt genuine fear for Megan. However, after this scene. I did not get a lot of the suspense again. It was not until the half way mark that anything really happened again with regards to any type of threats towards Megan. Until than it was just about Megan and Jax. Not that I am complaining too much as I felt the chemistry and sexual connection between Jax and Megan.

I liked that Jax did not fall into temptation the first free moment he had with Megan. He was about protecting her. While, I enjoyed getting to know how Megan and Jax met after a while I felt like the past did not really add anything to the story. While, this book may not have been a favorite of mine and it had some bumps along the way; I would read another book by this author. Maybe in this series as I do enjoy reading about strong men.

You can pick up a copy of this book on Netgalley until April 11th.
Sidney Halston