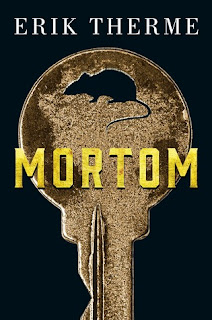 Andy Crowl barely knew his recently deceased cousin, Craig Moore, so he’s especially surprised to be named as the sole beneficiary in Craig’s will. Not that there’s much to inherit: just an empty bank account and a run-down house.

Once Andy arrives in the town of Mortom, however, he’s drawn into his puzzle-obsessed cousin’s true legacy: a twisted and ominous treasure hunt. Beckoned by macabre clues of dead rats and cemetery keys, Andy jumps into the game, hoping to discover untold wealth. But unsavory secrets—and unanswered questions about Craig’s untimely demise—arise at every turn, leading Andy to wonder if he’s playing the game…or if the game is playing him.

Something’s rotten in Mortom. And this dead man’s game might not be all that Andy is doomed to lose.

This is the second book I have read from this author. The first was Resthaven. While, I liked it and it was a horror story as well. It was written more at the young adult level and so the horror level seemed toned down. While, the horror in this book was not all blood and gore all the time or in your face; the story is more meant to be suspenseful and kind of a psychological thriller. Mr. Therme quickly draws me into the story by dangling a dead rat with a piece of paper stuffed in its mouth. Once, the author had me hooked, he proceeded to slowly reel me in like a fish. By this I mean that the story slowly revealed what really happened to Andy's cousin.

The concept of Andy going on a treasure hunt was fun. I honestly, gave up trying to figure out the clues after the third one. Instead, this left me to just sit back and enjoy the story. Which, I would comment and be upset by the slow progression of the mystery but the way the author wrote the story, I was not mad. Reading another reader's comment about how she did not like Kate, Andy's sister was something that I had to agree on. Not in the way that I hated her. At first she was happy to help Andy but when he started being obsessed, she withdrew from the mystery but than would jump back into the mystery by tracking down information. So, you could say that I found her to be wishy-washy. The progression of Andy's demeanor as he became more involved was scary. Especially the fact when Kate did pointed out that Andy was sleeping in Craig's bed and wearing his clothing. The last third of the story is where it picks up speed and all comes together. So, far this book is my favorite from this author and I look forward to reading more books from Mr. Therme.