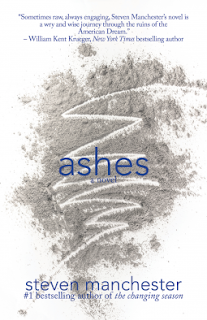 Middle-aged brothers Jason and Tom Prendergast thought they were completely done with each other. Perceived betrayal had burned the bridge between them, tossing them into the icy river of estrangement. But life – and death – has a robust sense of irony, and when they learn that their cruel father has died and made his final request that they travel together across the country to spread his ashes, they have no choice but to spend a long, long car trip in each other’s company. It’s either that or lose out on the contents of the envelope he’s left with his lawyer. The trip will be as gut-wrenching as each expects it to be . . . and revealing in ways neither of them is prepared for.
At turns humorous, biting, poignant, and surprisingly tender, ASHES puts a new spin on family and dysfunction with a story that is at once fresh and timelessly universal.

It has been a while since I have read a book from this author. This book made me remember why I first fell in love with Mr. Manchester's writing. He writes with such passion. All of his stories and characters come alive. It was like I was back with family. Which is fitting as this book is about two brothers, Jason and Tom.

Jason and Tom were likable and relatable guys. However, this could have not ended up being the case. They could have both been jerks. The journey that Jason and Tom took was life changing. I really felt like I grew closer to them both as the story went on. The brothers may have thought that their father was playing one of his twisted games with them but in the end I kind of think that even he was asking for forgiveness with where the end of their road trip took them. Ashes will have you thankful for family either by blood or close friends. Ashes is a memorable read!
Steven Manchester