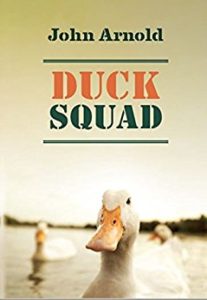 Three ducks escape from a university lab experiment and find sanctuary in a fraternity house. They discover human beings can be their friends – and enemies. Their adventures begin righting wrongs – and getting even.

What a fun read. I have always believed that animals can speak. We as humans just have to listen. Some of us have the ability to communicate back with the animals. When I was little, we used to have ducks. Ducks are intriguing animals.

The ducks in this book were stars. Although, the true leader was Quock. Yet, Guk and Op were good sidekicks. It was great that Stan (human) just went along with the fact that the ducks could speak. Well via a laptop but still speak none the less. They way they took on the bad humans were awesome. Then there was the funny moment when they helped stop a thief. If you are an animal lover or just looking for a funny book to read, then check out this book. It is "quacking" good.


The humans in the lab coats turned off the lights and left the room, shutting the door behind them. Quock listened carefully so he could hear them walk down the hallway and out through another doorway to the outside world.


Quock waited until there was no other sound in the building and he quacked at Guk who he could see in the cage next to him in the dim evening light from the lab windows.


Guk wearily lifted his head from under his wing and quacked, “I was.”


Guk looked over at Op’s plump, feathery figure in the cage next to him and then at all the sleeping Pekin ducks in all the other cages. He said, “Everybody’s asleep. Those drugs they give us make us sleepy. Why aren’t you asleep?”


Quock looked around apprehensively. “Something’s happened to me.”


Guk was wide awake by now. He stared at Quock.  “Like what?”


“It’s like a cloud was lifted from my head,” Quock explained. “Suddenly I can understand.”


Guk almost laughed. “Understand what? It’s the drugs they give us. They can make you think all kinds of crazy things.”


Quock stared back at Guk. “No, I mean it. I can understand them. I know what they are saying.”


“You mean – the humans in the white coats?”


“Yes. The humans in the white coats. I can understand them now. And I can read what they write.”


Guk looked around at all the sleeping ducks in the room.


Quock took a breath and whispered. “They are going to eat us.” 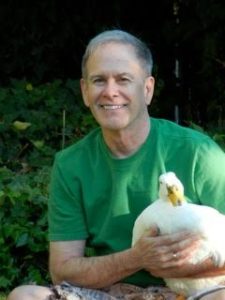 He is author of “Duck Squad,” “Autobiography of a Duck” and “Going Home” – available via Amazon.com.

You can visit John’s blog at http://johnharnold.wordpress.com.