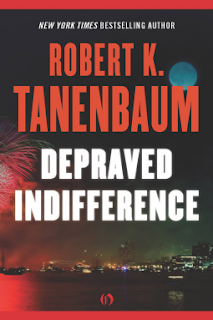 Book Two of the bestselling Butch Karp legal thriller series: the prosecutor goes after Cold War terrorists and finds himself tangled up with the CIA, the FBI, and the Mafia

Butch Karp has never shied away from a difficult case, and when Croatian terrorists hijack a plane and kill an NYPD bomb squad cop in a bomb blast, he's eager to prosecute the high-profile killers. But Karp's aggression puts him at risk when his investigations uncover messy government secrets. Certain elements of the FBI and CIA don't want the trial to go forward, and are willing to go to extremes to sabotage Karp's case. Mired in local bureaucracy and international intrigue, only Karp's dogged determination-along with the help of his crime-fighting partner and girlfriend, Marlene Ciampi-can once again deliver justice.

This ebook features an illustrated biography of Robert K. Tanenbaum including rare photos from the author's personal collection.

Robert K. Tanenbaum is the New York Times bestselling author of twenty-three legal thrillers featuring Butch Karp and his crime-fighting wife, Marlene Ciampi. Before publishing his first novel, Tanenbaum had an accomplished legal career. He served as Bureau Chief of the Criminal Courts, ran the Homicide Bureau in New York City, and was Deputy Chief Counsel to the Congressional Committee Investigations into the assassinations of President John F. Kennedy and Martin Luther King, Jr. He has also served two terms as the Mayor of Beverly Hills.

Yet, I found Marlene to be a nice strong voice. Her and Karp's relationship helped added relief to the story. In addition, Marlene is probably the only person that can get Karp to loosen up as well as become the boss. While, Marlene is strong and smart, she has a bit of a fun girly side to her as well. Nothing wrong with a princess bed and dresses and heels.

The part that I didn't like the most about this whole book is that by the half way point, neither I or Karp were any closer to learning a motive for the hijacking. At this point I jumped ahead several chapters to speed the story along. Yet, it was kind of too late as I was disinterested and found the ending alright.
Robert K. Tanenbaum