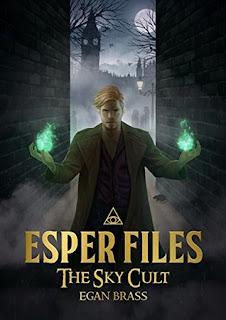 After the events of the first book, Freya has joined the Institute - an organization created to help Espers control their powers, and she thought she’d finally found peace.

That is, until Anti-Esper weapons find their way into the hands of The Coalition, a radical group who is determined to kill anyone with powers. At the same time, the Sky Cult has arisen, claiming that Espers have the right to rule over lowly humans.

The timing couldn’t be worse, as all of this happens three days before Esper Day, the first holiday designed to show that humans and Espers can coexist.

Now Nathan, Freya and the team have to fight both organizations in a race against time before one of the radical groups tips the scales, and plunges the entire world into their own version of Armageddon.

This is the second book in this series. If you are a fan of steampunk, strong characters, good storyline, and plenty of action, than you have to check this series out. Although, I would recommend that you start with the first book, Esper Files. It helps to set the stage for this series and who all of the major players as well.

Nathan, James, and Freya are back fighting for good. Yet, I have to comment by saying that I found James to have been a little less of a strong voice in this book. Both Nathan and Freya had big roles in this book. Their powers really grew as did they; especially Freya. She has become more confident in her own skin and her abilities.

Now, we go to the bad side. Lord Bartholomew is back as well. Only this time, he is not alone. There are many others. My favorite is Red Cap. I agree with the other readers that his wit was what made him stand out. Besides, who else can get away with calling Lord Bartholomew "Barty" and still be standing. The whole time that Red Cap was talking all I could hear was Johnny Depp's voice as Captain Jack Sparrow voicing Red Cap. It was entertaining.

Action. Did someone request lots of action and battles. Yes, please. There was so much action that there was never a dull moment. The ending was a good lead into the next book. I am a fan of this author and series. Mr. Brass is a great storyteller that will leave you craving more!
Egan Brass